The next challenge for me was more mental but in fact more psychological – a five-day sailing trip from Cartagena to Port Lindo in Panama, via the San Blas Islands.   I have an a pretty strong fear of open ocean sailing/boating and have been sick many times at sea – typically in small boats.  Having braved (and survived) the Drakes Passage (to Antarctica) a few years ago and two weeks around the Galapagos Islands last year, I bravely booked this trip.  Of course, as is often the case, the fear was unfounded.

I felt better after the predeparture meeting the night before we left Cartagena.  Certainly better than the trepidation I felt after the lost city trek predeparture meeting 😬.  The Capitan (an American) seemed to have the right balance of safety and fun.  He had numerous rules (of course) for life on the boat but the first two were most important; Rule number one – stay on the boat i.e. don’t fall overboard particularly during the 36-hour open ocean crossing and rule 2 don’t be a douchebag!  Not sure if the second is a standard sailing rule but it worked for me 😜.

It became apparent at the meeting that it was going to be a boat full of guys.  There were only four girls and two of those where in couples 😬. I think many of the young guys were a little disappointed and it was odd coming off a trip with mostly girls for the last 3 weeks.  Still, by the end of the trip we were all one big happy international family – NZ, UK, Ireland, Netherlands, Germany, Brazil, HK, Canada and the USA.

On our departure day, we all met at the supermarket near the marina to stock up on drinks and snacks for the trip before heading to the wharf to board.  Not before our bags were given a thorough search by the Colombian police!

As we got on board the Sovereign Grace (74ft and 60 tonne yacht) we put our shoes in a bag and they were put in the hold – shoes were not necessary again until we got off the boat in Panama 6 days later!  We also met Coco, the boat dog – he loves being in the dingy, swimming, paddle boarding – all the things you would expect a boat dog to love.

As we sailed out of Cartagena, many of my crew mates cracked open their first beer and ate a big dinner!  Perhaps because I am older and wiser (or perhaps not) I knew that the sailing was never going to be completely smooth so I gave both a miss!  Thankfully it was not that rough but there were 2-3 metre swells which meant the boat rolled a lot.  I did not sleep well due to the rolling (despite working out the best way to wedge myself in my bunk so I did not roll around too much) and spent most of the first day watching Netflix in my bed – I did not have my sea legs and did not feel comfortable walking around the boat much.   It was also a pretty noisy first couple of nights as our things moved around and we quickly learnt the importance of safely stowing everything.

Thankfully that part of the deck I was sitting was undercover and it soon became my favourite place to sit.  (It was also where the crew slept so I did have to wait for them to wake up before I could sit there in the morning.)

On the third morning we woke up in Panama – the view from the bathroom window was of the Panamanian mainland and on the other side, the 365 San Blas islands.  It was still over cast from the nights rain but the moody sky was very atmospheric.

Time for some facts.  The San Blas islands are a group of islands in the archipelago de San Blas, located in the northwest of Panama facing the Caribbean Sea. There are actually 378 islands within the archipelago but most people like to say there is 365 islands, one for each day of the year!  The majority of the islands have no inhabitants (some are merely blips in a vast ocean), but on the larger ones the indigenous Kuna (or Guna) people live. Interestingly, the archipelago de San Blas is an autonomous territory in Panama formally called Kuna Yala. 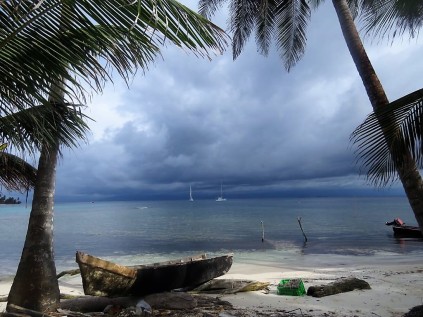 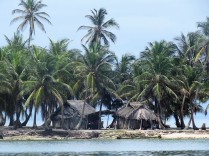 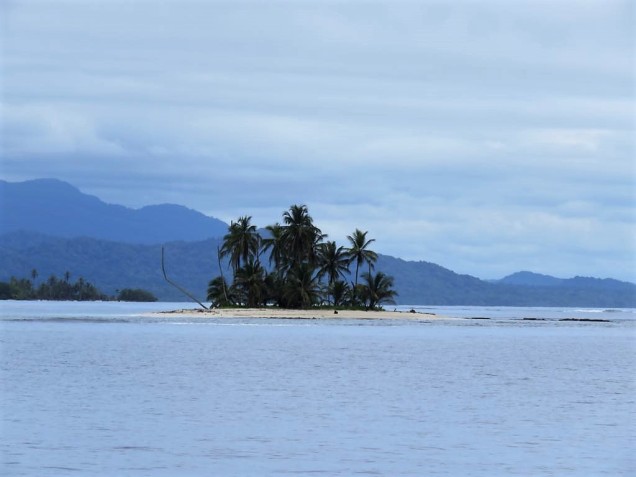 Fact time again.   The Kuna people have their own laws, norms and values and these are generally different to those of the traditional Panamanian culture. Of the approximately 300,000 Kuna’s that live in Panama (in three politically autonomous areas including the San Blas islands), Costa Rica and Colombia, only 50,000 live on the San Blas Islands.

Like the Wiwa we met in Colombia, each Kuna community has a political and spiritual leader (here called a saila) who memorises songs which retell the sacred history, legends and laws of the people.  He also administers day to day social affairs for the community

As we wandered around one of the larger islands we noticed a number of Swastika like flags flying – upon doing some research when we got back to civilisation, I discovered that the Kuna Swastika flag was adopted after 1925 rebellion against Panamanian suppression.  According to one explanation, it symbolises the four sides of the world or the origin from which peoples of the world emerged.  The flag is also used for the province of San Blas as well as Kuna ethnic flag.  In 1942 they actually modified the flag and added a red ring encompassing the centre of the swastika because of Nazi associations; the ring was later abandoned!

Day turned to night and the boys lit a fire as it got dark – unfortunately most of the wood was wet and it was amusing watching the boys try and battle it out in the manly task of fire lighting!  The crew brought dinner over to the beach and we eat it around the kerosene assisted fire.

As we headed back to the boat in the dingy, the boats wake stirred up the florescent plankton trailed behind us 😘.

Day four started with the crew catching a large king mackerel.  They always have lines trawling behind the boat and in fact they had lost something big the first day as it pulled out 200m of line before snapping it!  The fishing achievement was followed by three wonderful dolphins who joined us and swam under the bow of the boat for about 15 minutes. 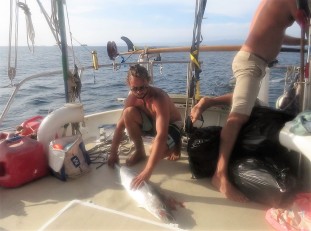 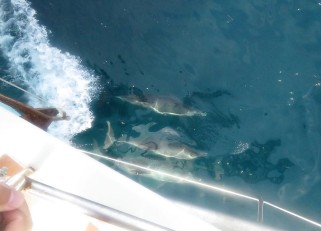 The sun was also out this morning and this meant we had a great snorkelling stop at a tiny sandbar.  We swam from the boat and Coco joined us for the swim.  It seemed like a long way for his stumpy legs but he managed to beat us all. 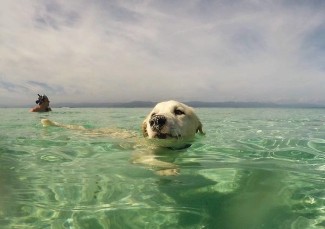 That afternoon we meet up with the sister boat of the Sovereign Grace – the Wild Card – and together we all spent the day on an island before a beautiful sunset (with rum in coconuts) and then a costume party and massive bonfire in the evening.  The other boat had just used dress up clothes from the boat but we were encouraged by our captain to collect things from the island to make our costumes. I joined with two of the other girls and we made similar costumes out of palm fronds and leaves.  It was clearly worth the effort as we won the girls competition. 👍🏻  It was a great night.

Day 4 and most people were hungover from the nights partying and our first stop was the Panama immigration office on a tiny island run by the Kuna – it was a massive contrast between being incredibly informal and laid back to an immigration officer who took his job very seriously.  The captain had already given him our passports and a printed list of our names.  We walked in barefoot (though the boys were asked to put a shirt on) and sat in front of the officer when he called our name – he asked how long we were staying and how we were leaving the country and that was that!

Apparently, if he is given a handwritten list, he gets out his ruler and ensures all the t’s are crossed at the same height and all the i’s are dotted the same!  Oh, and we also had to pay out US$20 Kuna tax here!

After we had formally entered Panama, we travelled to another island for to spend our last afternoon playing volleyball and swimming – this time amongst starfish which we had not seen before.

Back on boat and set sail for the final time, this time to Puerto Lindo on the mainland of Panama.  As soon as we started sailing the roll of the boat picked up and moving around the boat was difficult again! By 8pm I was ready to head to bed (I actually just needed to go to the bathroom but decided it was not worth the effort to go back up to the deck again!).  Wedged up in my bunk, I managed a decent night’s sleep and we arrived in to the harbour in the early hours of the morning so our last few hours’ sleep were calm and peaceful.

That last morning on board was a stormy morning, but we were safely moored in the beautiful little port surrounded by jungle clad hills and I enjoyed watching the lighting from my usual seat on the boat for the last time.

It was an incredible 6 days of being sandy and salty and one I was lucky to survive without being sick – some were sea sick, others (in fact almost everyone) had a terrible 24-hour stomach bug which wiped them out for a day at least – so I was very fortunate not to be affected

The food was amazing.  We were given fours meals a day – a light breakfast between 7-9 for early risers (fruit, cereal, toast), a cooked breakfast around 10 (sometimes it was a meal I would have called lunch rather than breakfast), lunch around 1.30-2 and dinner between 6-8 depending on what we are doing and whether we were having it on the beach or on the boat.

Back on land and we waited for our transport to Panama City in a small restaurant on the water front (there really was nothing else in this town).  Of course, the lady there had a TV and she was watching the opening of the Soccer World Cup Robbie Williams singing 😂.

It was only two hours from Puerto Lindo on the Caribbean coast, to Panama City on the Pacific coast via the town of Colon.  It was small narrow roads as far as Colon and then a great highway across the country.  It is these contradictions of old vs new and Latin vs western that Panama is full of. 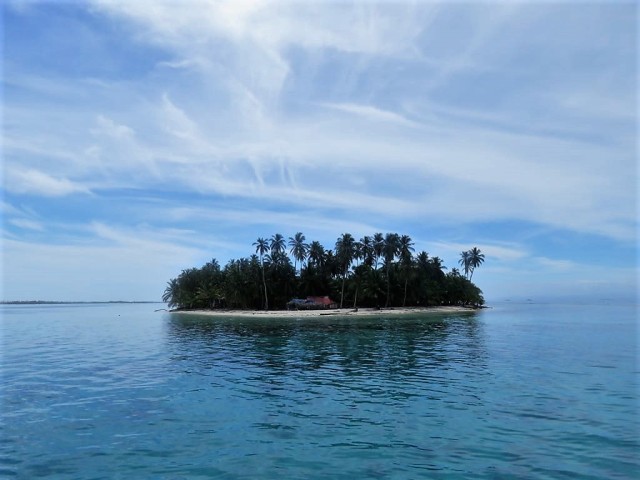