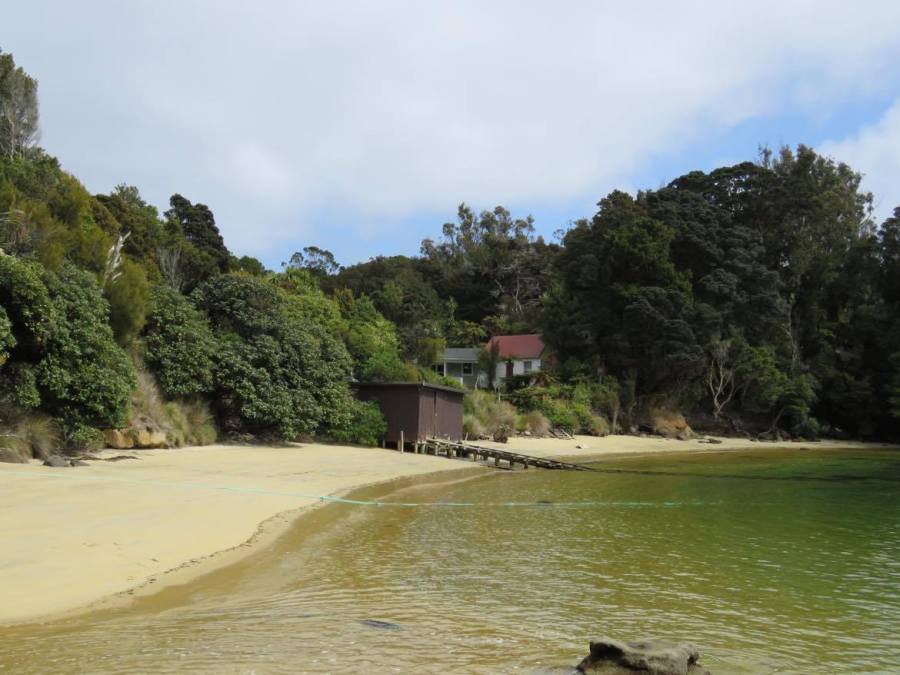 After a late night, we were up early for our visit to nearby Ulva Island.  A must do when visiting Rakiura and again, this is something you can easily do without a guide but I always like to know about what I am seeing and of course they know where to look for things lol. We met our guide, Leah, (again we used Ulva Guided Walks) at the small wharf in Golden Bay and the caught the water taxi across Paterson Inlet to the island (passing a few Little blue penguins bobbing around in water) – just a 7 minute journey.

Today, Ulva Island (named after an island in the Scottish Hebrides islands) is a predator free sanctuary just off the coast of the Stewart Island mainland.  It became predator free in 1997 and is one of the few sanctuaries in New Zealand that has undisturbed podocarp forest – it really is like stepping back in time.

Visited occasionally by the local Ngāi Tahu Māori, the island was occupied in 1872 by Charles Traill (from the Orkney Islands) who established the first post office in the region – he called the bay he lived in Post Office Bay and this is where we arrived on the island.  When the mail boat arrived, he would raise a flag and the locals would put on their finest clothes and make their way to the island to collect their mail and catch up on the local gossip.

Charles was a keen botanist and conservationist and established extensive gardens in the area around his house and the post office/shop.  Some of these exotic tree species still remain and are the only non-native trees on the island.  In 1922 the island became the first scenic reserve in New Zealand, and he post office operated until 1923.  Today, the island is managed by the Department of Conservation, except for the 7 hectares of privately owned land where the homestead still remains (256 hectares in total).

We were greeted by some very early blooming rata trees (apparently is a sign of a long, hot summer) and a very inquisitive Kaka who got so close I thought it was going to take my phone (which I was videoing it on) right out of my hands!  According to Leah, the Stewart Island Kaka have their own dialect, distinct from those on the mainland – of course, I do not speak Kaka so cannot confirm or deny this but what I can say is they like to make their presence known!!

The current population of robins were founded by 20 individuals released in the late 90’s – today they are thriving and on almost every walk on the island you will be visited by at least one robin. They are incredibly confident and appear to have no fear as they dance around, trying to mimic rain on the earth to disturb the insects which they feed on.  They are also a fan of you scuffing up some of the earth with your foot to help them out.

Another fun fact about the birds of the island, Tieke (or Saddleback) here are unique as they do not develop their ‘saddle’ until adulthood, the North Island species on the other hand are born with it.  Also, relatively unique in the bird world, the juvenile will stay with their parents for a year and will help gather food for the following years chicks before leaving the family.

Ulva is so small it is easy to cover most of the island in a day, depending on how much time you want to spend watching and listening to the birds and studying the plant life.  I like to spend a lot of time doing that and therefore we only waked a couple of the tracks.  And there was a bird symphony – Leah could identify Mohua (sometimes called a bush canary), brown creeper and grey warbler – unfortunately we could not see them all as they were high in the canopy.

We saw Red crowned kakariki ❤️❤️ eating last summer’s berries off grown, Tuis feeding on tree fuchsia (the largest species of fuchsia in the world).  We had a brief glimpse of a Yellow crowned kakariki and a Mohua (Yellow head) who apparently are often seen together (perhaps all the yellow headed birds stick together lol).  And we spotted another juvenile saddleback which had its wattles and saddle just coming through.

The bush is stunning, and as I previously mentioned, a perfect example of an ancient podocarp forest (one of the best in the country as it has never been cleared or milled).  There are towering Rimu and totaras – apparently if a grown man can reach their arms around the Rimu and touch it is around 250 years old.  The ground was full of beautiful umbrella mosses ❤️and Leah pointed out a so called dinosaur plant – a fern ally which is 400 million years old (perhaps not that exact plant, but the species itself)!    We saw Spider Orchids, just starting to flower and bamboo orchids, not quite in flower yet and beautiful crown ferns with their connected root system.  And don’t forget the cute Hen & Chicken fern whose spores grow as miniature ferns on its fronds before they drop off to set out into the world on their own lol.  We were grateful to have Leah tell us lots of wonderful stories about the trees and plants – some fact, some a little more mythical.

One of the most fascinating stories was that of the Ulva Island postcard tree – which despite its name, has had numerous uses.  Not surprisingly, its broad leaves used to be used as postcards.  They could be written on and posted (even internationally) until the 1970s!!  Other uses include toilet paper (as good as 3 ply apparently) and a crash pad for Sooty Shearwaters who are not great at landing to use these trees to soften the blow so to speak. lol

One of tracks took us out on to Boulder Beach, where we watched Weka feeding on crabs (sometimes with a little assistance by lifting rocks to expose the crabs).  As typical with Wekas, they had little fear of us, and just carried on their own business.

Further on we came to Sydney Cove, a stunning tropical looking beach of golden sand and turquoise water.   Here we were greeted by a huge sea lion, who had just hauled himself up the beach.  He was the biggest I had seen and even the biggest Leah (our guide had seen) so we had to be careful to get past him.  The rule is to never cross between a sea lion and the sea, effectively cutting off their escape route, however this guy left us no option, so we moved quickly and quietly around him.

Our final stop on Ulva was at Flagstaff Point, not surprisingly, the point where Charles Traill use to raise his flag to advertise that the post had arrived.  Today it is a lovely lookout over Paterson Inlet.

It was a wonderful morning spent on Ulva Island and we were so happy we had Leah to guide us around   – we would have missed out on so much had we gone on our own.

Back in Oban, we decided to hire a couple of e-bikes to explore a little further.  First, we headed one way out of town and at the end of road we found ourselves in Lee Bay, the starting point for the Rakiura Track (one of New Zealand’s Great Walks).  It is also the site of a huge chain that goes into the sea –Te Puka, the anchor stone.  As the Maori legend of creation has it, Maui (now of Moana fame) used Rakiura as an anchor for the great ancestral canoe (Te Waka o Aoraki – the South Island).  (FYI – the North Island is the fish he and his brothers caught.)

As it turned out, we were actually not far from where we were kiwi spotting the night before and could see the predator proof fence as it went up from the sea.  It was so peaceful to just sit on a beach for a bit, taking in the sun and listening to the bird song.

Back on the bikes and we head back through town, out the other side and along to the end of the bay to visit Ackers Stone House.  Lewis Ackers was an American whaler who settled on the island in 1836, before Oban was established.  He built the house himself to house his Maori wife and their 9 children.  Apparently, they had bunk beds stacked 5 high to sleep everyone in the small house!  They certainly had an amazing view (on a nice day)!

We zoomed back into town using the throttle and hardly pedaling at all – it was my first time on an e-bike, and I do not think it will be my last lol.

For our final morning, we had thought about doing another walk but decided just to relax.  After dropping off our bags at the plane ‘depot’ (a small office in town), we wandered around the shops (all 3 of them lol).   We walked up the hill by the church and over the small headland to a view over bathing beach -it was a beautiful golden beach though you must have to be careful not to be caught at high tide!!

Back to town and we went back to the DoC office to watch some of the videos about the island history that they play on loop until it was ready to board our flight back to the mainland.

What a wonderful place Rakiura/Stewart Island is.  Oddly, it is somewhere they New Zealanders don’t tend to go, and the vast majority of their visitors are passengers on cruise ships.  Of course, 2020 changed all that and they are one of the few places in New Zealand that have managed to sustain their tourism industry with New Zealanders who are exploring home more rather than going overseas. Even the flight in and out is worth the visit.

I will leave you with a quote from Leonard Cockayne (considered New Zealand’s greatest botanist and a founder of modern science in New Zealand) in 1909 “The face of the earth is changing so rapidly that soon there will be little of primitive nature left.  In the Old World, it is practically gone forever.  Here, there is Stewart Island’s prime advantage, and one hard to overestimate.  It is an actual piece of the primeval world.”  He was not wrong!