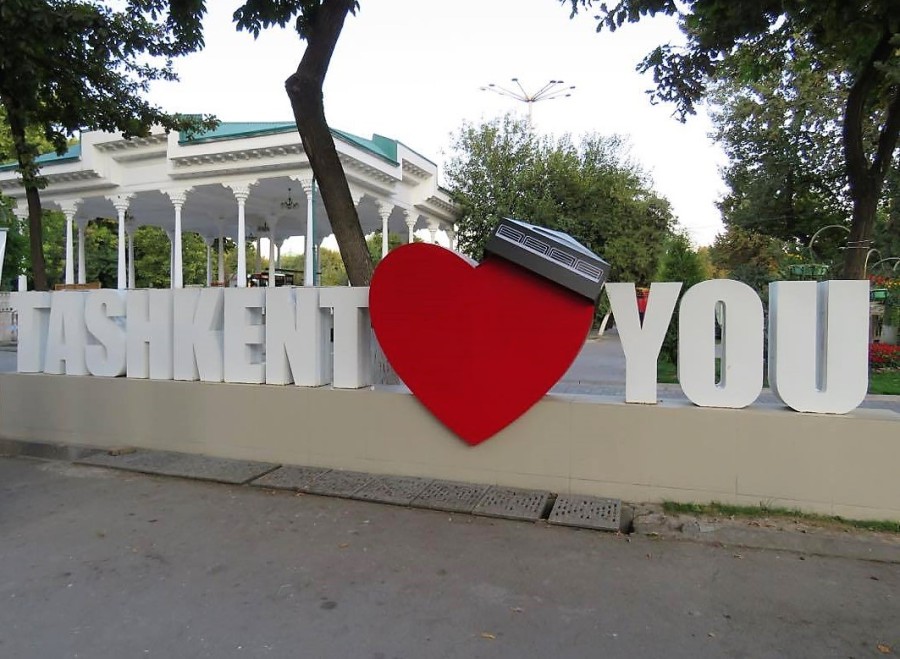 The final stretch of Tajikistan was through the Ferma Valley, once home to a Soviet uranium mine. When it was closed, they left behind large amounts of radioactive waste which has cause many radiation issues for the local nomadic population.

Upon reaching the Oybek border we said goodbye to Farhodbek and had two passport checks before we even reached the actual Tajik border, then just one check to get into Uzbekistan.

We met Surat our guide at the border and his first introduction to the country was to proudly declare that everyone in Uzbekistan is a million!  Easily done when US$100 is the equivalent to over a million s’om.

Uzbekistan is the most populated country in Central Asia, with almost twice the population of the entire area and the capital, Tashkent has a population of 2.5 million.  There was clearly a bit of a baby boom after the end of the Soviet era, as there is a very young population with 65% of the population under 35 lol.

Until recently, the country has had turbulent relationships with its neighbours – a bit of an issue considering it borders on most of the other Stans!  Thankfully, the situation has improved greatly since the death of the first president in 2016.  One of the first things the new president did was to abolish visa requirements for 100 countries and improve relationships with their neighbours.  Apparently, he even hosted a meeting between Taliban and Afghani leaders.

Fun fact:  Uzbekistan is one of only two doubly landlocked countries (Liechtenstein is the other).

Cotton is Uzbekistan’s main crop (and one of its main exports) with 60% of the land used to grow it.  They are also now diversifying into other crops such as apples, peaches and pears.  In what seems like a throw back to Soviet times, farmers can only rent land for 55 years from the government.  They can’t own the land nor is renewal guaranteed!  The government do help with the provision of fertilisers, but in return, the farmers must sell all their cotton to them – not sure if they get a fair deal or not??

Did you know Uzbekistan is the world’s seventh biggest exporter of gold?  They also have a healthy export of cooper, uranium and gas and significant untapped reserves of oil making it a relatively wealthy country on paper.

Uzbekistan was an early adopter of a change in alphabet from Cyrillic to Latin, starting the process in 1993 with the expectation that all the population would have learnt it by 2000. However this didn’t happen and the alphabet has undergone numerous changes since the one introduced in 1993.  Now days you can see the Latin and Cyrillic languages side by side, or sometimes one or the other – often it depends on the intended audience.  Thankfully, for me, having signs in the Latin alphabet makes them possible to understand and definitely less foreign to me.

Our first stop in Uzbekistan was in the capital, Tashkent, only 100km from the Tajik border. It is one of Uzbekistan’s ancient Silk Road cities which sat on a major caravan crossroads – it dates back to the first century BC and it celebrated its 2200 anniversary in 2009.  Tashkent means stony settlement, and it was surrounded by stone walls until at least the 12th century.

In contrast to the other Stans I had visited, the Uzbek’s are historically settled people, rather than nomads, living in oasis towns and cities through the country.  Tashkent is one of those cities and despite only have 400mm of rain per year, it is incredibly green.

First impressions were overrun with the masses of traffic as we entered the city, so much more than we had seen in other countries but I guess that comes with the massive increase in population.  Chevrolet cars are manufactured in Uzbekistan and for these reasons, most of the cars on the road are that brand – that, and Ladas – again way more than I had seen elsewhere. (I must admit I was beginning to get a little obsessed with the good old Lada’s that certainly seem to have stood the test of time lol.)

Before lunch we had a quick stop in in a small park with a large memorial to the last large earthquake that struck the city – on April 26, 1966.  It was only a magnitude of 5.1 but it was very shallow, so the impact was immense.  According to the ruling Soviet Union, only 14 people died but the true number is believed to be closer to 200, with over 300,000 left homeless.

As with my hometown of Christchurch that was devasted by earthquakes in 2010/2011, it took over 10 years for the city to rebuilt, but it was an opportunity to redesign it.  Based loosely on St Petersburg, it was rebuilt with wide streets and lots of parks.

The memorial, known as the Monument to Courage, is dedicated to the men and women who rebuilt the city and has a clock showing the time of the first tremor (5.22am) and a man, shielding a woman and child from the earth opening up.

We were definitely ready for lunch by the time we made our way to the famous Tashkent Plov Centre at the bottom of the very tall TV tower (which has a rotating restaurant at the top and is lit up like the Eiffel Tower at night). Plov (very similar to Pilaf or Biryani you find in other countries) is the national dish of Uzbekistan and is a rice dish cooked in broth with vegetables and most commonly served with meat.  Apparently, plov dates back to the time of Alexander the Great in the 3rd century BC who spread the dish around his territories.

Unsurprisingly, the Tashkent Plov Centre only sells plov, cooked in massive Kazans (cast iron pot) in front of the two-story dining room which was packed so it was clearly good plov.

Due to its strategic location the old city of Tashkent has had a turbulent history. It was taken by the Arabs in the 8th century and then by Genghis Khan in the 13th century, before Tamerlane (who we met in Tajikistan) moved in in the 14th century.  In the 1860’s, the Russian Empire army invaded and started building a new town, though today the old and new parts have blended in to one.  Incredibly the old buildings (many of them dating back to the 16th century) have survived over 66 major earthquakes!

Our guide Surat, explained to us that we have to remember 5 M words when travelling around Uzbekistan: Madrasa (college for Islamic instruction), Mausoleum (a stately or impressive building housing a tomb or group of tombs), Minaret (a slender tower, typically part of a mosque, with a balcony from which a muezzin calls Muslims to prayer), market and money (I assume the last two need no explanation).

We started our afternoon of exploration in the Old City at the central of Muslim Tashkent – the Khast Imom Complex.  The complex houses various buildings include the Madrasa of Barak-Kahn, the Tilla Sheikh Mosque and the mausoleum of Saint Abu Bakr Kaffal Shashi (3 of those 5 ‘M’s).  Moreover, the complex as a library of original manuscripts which includes the world famous Quran of Caliph Usman Ottoman.

It was written in the middle of the 7th Century (not long after the death of the prophet Mohammed) and is written on over 350 pages. It was kept in the treasury of the Caliphs until it was moved from Baghdad to Uzbekistan during the time of Tamerlane.

Our next stop was the Chor-Su Bazaar or “4 streets” bazaar– one of the biggest and oldest markets in Central Asia and it is thought that the site has been home to a market for 2000 years.  More than just a market, it has been the location of public announcements and public executions over the years.  Thankfully these days there are no executions, just plenty of spices, nuts, fruit etc.

Given the masses of traffic, the clean and efficient metro is the easiest way to get around the city.  Built in the 1970’s by the Soviets, Tashkent is known to have some of the most beautiful and ornately decorated metro stations in the world.

We exited the metro at Amir Temur Square Station and headed to the Museum of Applied Arts.  The museum houses over 7,000 pieces of art including carpets, textiles, ceramics, an exquisite building that was once the home of the Russian ambassador.  As seems to be a theme of the trip, we came across a young couple having their pre-wedding photos taken in front of the building – they were so beautiful.

The final stop on our whirlwind tour of Tashkent was Memory Park and Independence Square in the centre of the modern city.  Within Memory Park, we visited the Glory and Memory Alley in honour of 400,000 soldiers died in World War II. Along both sides of the alley are nocks decorated with wooden carved columns and Memory Books where the names of Uzbek people who died for the “Motherland” in the Second World War are written.  At the end of the alley is the statue of a mourning mother with an eternal flame.

Independence Square has had numerous lives, in the 1800’s, it used to be the gardens of the General-Governors house and then during Soviet times, it was named Lenin Square with the mandatory large Lenin statue.  Finally, after independence in 1991, it became Independence Square and Lenin was replaced with the Independence Monument – a globe with Uzbekistan’s borders outlined on it.

That said, the Independence monument is somewhat over shadowed by the Arch of Goodwill, a huge archway, supported by 16 marble columns. Topped with sculptures of storks, symbolising peace.

Of course, we must not forget the large statue of Amir Temur (there will be more about him later) and also the lovely wide pedestrian streets filled with stalls and lights (sadly we were too early to see them in their glory).

Finally, our 13 hour day of travel and sight seeing was over and it was time for dinner at a western café.  Now, don’t get me wrong, the food so far had been amazing and always way too much, but it was nice to be able to make our own selection – I had a really good steak!

Day 1 of Uzbekistan over and we have only just scratched the surface.