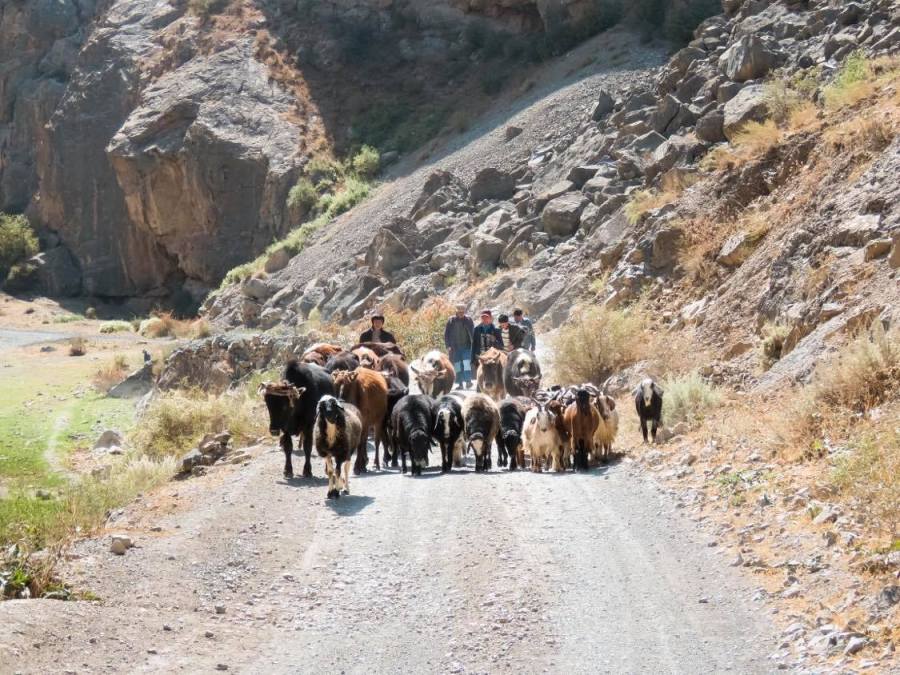 We will blame COVID 19 for the last writing hiatus! Working from home does not seem to give me any extra time and certainly does not give me any more motivation, but reliving my wonderful trips from last year is always a great way to reignite my wanderlust – even if I can not go anywhere or really even plan a trip at the moment.

Back to Tajikistan, Penjikent was a bustling little town in the morning with many people out and about in traditional dress doing their morning shopping or drinking tea.  Lots of car horns honking and barrow boys waiting for people in the market.

Today’s destination was the “Seven Lakes” in the Fann mountains not far from Penjikent. Unfortunately most of the journey was on some pretty bad roads (more about that later) so the journey took most of the day.  We drove out of the town through small communities and into the mountains – nature amazed me again today!

Although some take the opportunity to hike the full distance (and avoid the worst of the roads when travelling by vehicle) we were short on time so drove most of the way, stopping for photo opportunities along the road.

Each lake was a slightly different colour as we climbed higher into the mountains.  Passing by wildlife including a committee of vultures (yes, that is the collective noun for a group of vultures) and goats eating on the side of the rocks.

As we continued to drive further into the mountains and around lake number 4, the roads got narrower and we were all grateful to be having a break for lunch at a local home stay.  The tour company we were travelling with through Tajikistan were working in conjunction with the Government to help local people set up home stays in the region and were teaching them how to manage tourism.  It is a great initiative and was nice to be able to be part of the training.

Unfortunately, there was a power cut just as we arrived so a cooked lunch turned in to luncheon meat sandwiches followed by hot chips (when they finally got the fire going to cook them lol).  We were supposed to be having “bush legs” – in 1990, President Bush (USA) signed a trade agreement with Gorbachev (USSR) for the delivery of frozen chicken quarters to the USSR who were experiencing food shortages at the time.  These began referred to as “bush legs” and the phrase is still used to this day.

We were all happy to wait as the 13-year-old daughter of the family was glad to have the opportunity to show us the braclets and other things she had made for sale and it meant we had time to walk around the lovely gardens.  As we got to the 5th lake, we were approached by some other ladies who came out to sell their wares so they are clearly getting used to tourists come up in to the mountains.

The road to the 6th lake was nothing like I had seen before – barely wide enough for 1 car as it winds around the edge of the lake with a drop of about 10m into the lake on one side and a sheer cliff side going up on the other side!!  Not too bad until we came across another vehicle coming in the other direction!  At first there was a bit of an argument between the drivers – which our driver appeared to  win as the other vehicle started to reverse to a small area where you could just squeeze 2 cars passed each other right on the edge!!  Sometimes it was better just to close your eyes and hold on! 🤢

Unfortunately by the time we got to the end of the 6th lake we were running late and there was no time to walk up to the 7th lake. I was disappointed as I had been looking forward to the walk after such a long drive.  Instead we drove up to the final lake which was beautiful and we meet a lovely local family out for a walk and made friends with some local wildlife (cows and donkeys)  before walking back down to the 6th lake (obviously taking much less time that walking up!). 👍

We stopped at a small village on the way back down the mountain and walked through it for a short time  – it is always so interesting to see the locals way of life, people going about their everyday business – doing washing things in the river, herding livestock, kids playing in the streets.

Back in town and I decided to take a night off from the group dinner and just watch Netflix and chill with a snickers and a Diet Coke – just what I needed as although group tours are a great way to see as much as possible in a short space of time, spending 16 hours a day with the group can get a bit much!

Next morning I had time to visit the local market before we set off to our next destination. Another great opportunity to see the local people going about their normal morning routines.   Walking around I was often greeted with the Arabic greeting Salaam Alaikum, said with a bow of the head and your right hand in your heart.  It makes sense here as Tajik is a Persian language but the greeting  was also used in the other stans we have already visited but I guess more because of the Muslim connection.

Today was another long driving day – approximately 6-7 hours which started off through the mountains and through another 5km long tunnel – this time built by China (and it was much better than the Iranian built one we had driven through a couple of days before.)   We had a couple of road side stops for toilets and snacks,. First in a small town, where water running off the mountain side was used to keep drinks cool and then another stop on the side of the mountain where small stalls were set up selling local snacks stop – lots of dried apricots, almonds, apricot kernels etc.

If we were lucky enough to have Farhodbek in our vehicle (our Tajik guide), we would be entertained with local stories and fun facts e.g. Tajik weddings used to be huge and last a full week but to keep costs down, the Government took it upon themselves to put a law in place to cut this down to only one wedding party which can last only 3 hours with a maximum of 150 guests!

Our next stop was in the town of Istaravshan, allegedly founded by Cyrus the Great in the 6th century.  As far back as the 14th century the city was renown in Central Asia for its artisans and was a regular stop on the Silk Road caravan route.  Even today it is still famous for its blacksmiths and in particular it’s hand-crafted knives.   Another claim to fame is that Alexander the Great (allegedly) married a girl from Istaravshan.

Different crafts were in different neighbourhoods and we visited the blacksmith neighbourhood where they were making knives and sickles etc.

As is now common when we stop in small towns, people come up to us wanting to practice their English and it is a nice way to interact with them.  On this stop we met an older gentleman, who, after a brief conversation, revealed a couple of cloth bags over this shoulder and under his arm … in these bags he had quails – fighting quails 🤔🤔.  Apparently, there is a long tradition of quail fighting in the city but I had never heard of it!!  Even Aijan, our guide from Kyrgyz had never seen such a thing.

As we got back on the road, we were now out of the mountains and back to the wide open plains and it was not too much longer before we arrived in Khujand, our final destination for the day.

Our hotel in Khujand was right on the water front of the Kayrakkum Reservoir, otherwise known as the ‘Tajik Sea’ as it is the largest body of water they have! It had a real resort feel to it and it was extremely peaceful – I actually felt like I was on holiday for our two nights there 😂 .