Despite what people may thing, of course there is the odd weekend when I do not travel abroad and I try and spend that time seeing as much as I can of the UK … please excuse the disjointedness of this blog which is merely musings on those weekends spent roaming closer to home ….

Kings & Queens – April 2019 When I first got to Cambridge, I did a free walking tour around the city, but I decided to pay for a tour to two of the colleges you have to pay to visit – Kings and Queens. The tour started at the information centre and the first stop was not related to Kings or Queens, but was outside the famous Cavendish Laboratory. When established in 1874, the locals didn’t like the new facility as they don’t like change, but they dislike others doing better than them, even worse!  It is certainly done them well since then, seeing 31 noble prize winners pass through its doors!  Notable discoveries include the electron, neutron and the structure of DNA!!  Outstanding work! 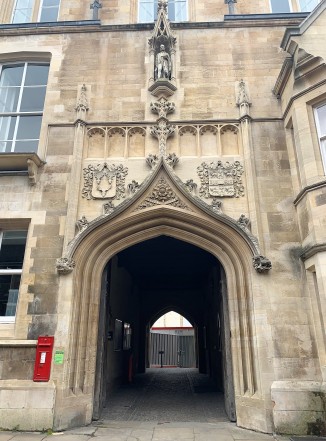 We then moved on to Queens’ College, (the wife to Kings College (the husband) as the buildings are next to each other and built around the same time).  Still today, the Queen is a patron of Queens’ College. Queens’ College was founded by Margaret Anjou in 1448 and some of the buildings we see today date back to that time.  The college is set around a medieval courtyard (based on that of monasteries of the time) and straddles the Cam – apparently there is the ‘light side’ and the ‘dark side’, separated by the famous Mathematical Bridge across the river. 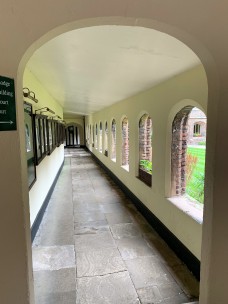 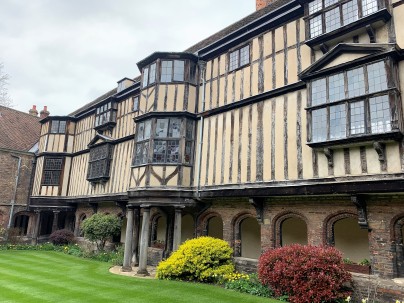 The official name for the bridge is the Wooden Bridge (not so catchy I guess) and was originally built in 1749 and rebuilt in 1866 and again in 1905.  It is called the Mathematical Bridge due to the sophisticated engineering design that makes the bridge appear arched, despite being made out of straight timbers! 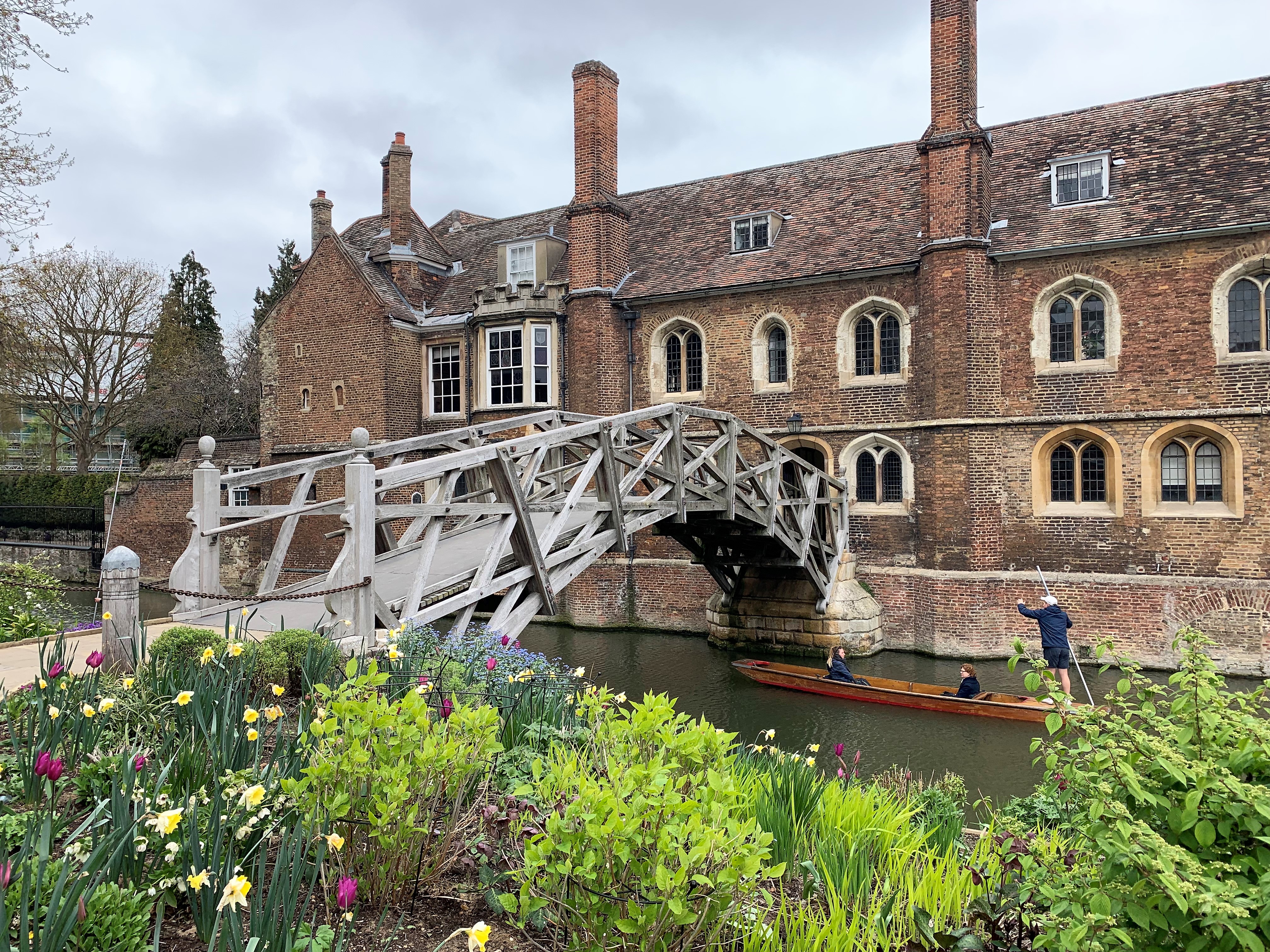 The college chapel was built in the 19th century to replace the original chapel which was too small as the college grew, at that time, all students were required to attend chapel every day! 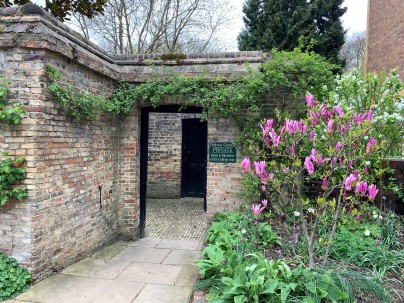 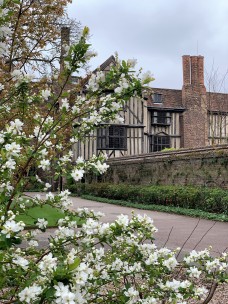 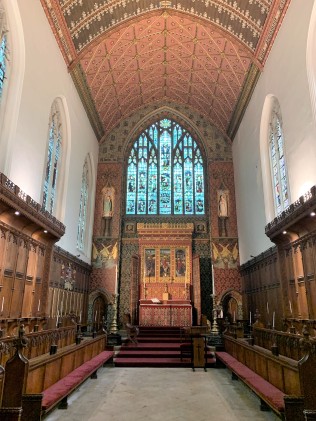 Today, Queens’ College has more postgrad students, than undergrads and has almost 50% women students (impressive considering they only admitted women in 1980)! Next up was Kings College, founded in 1442 by King Henry VI.  He had set up Eton for poor boys (this is much changed now as it caters for the rich rather than the poor) and he created Kings College so they could continue on to university, in some cases it was an automatic transfer. The jewel in the Kings College crown is the wonderful (and huge) Gothic Chapel.  It took 100 years to build being started by Henry VI and then finished by Henry VII.  They brought stone from different parts of the country by river and you can see the different parts of the chapel are in different coloured stone which indicates it was built at a different time. 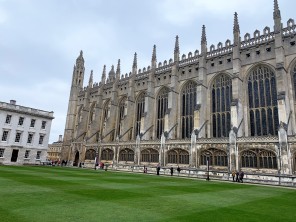 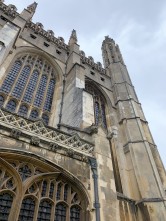 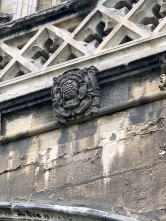 As well as different stone, the end built by Henry VI is very plain inside and out, in comparison the other end which was built later, is much more ornate.   It is a stunning building and is in fact it has the largest fan vaulted ceiling in the world. Inside, the ‘new’ end of the building was filled with ornate carvings and stone work, in comparison to the older end which was ‘decorated’ with the graffiti left by Oliver Cromwell’s troops, who camped inside with their horses the civil war. 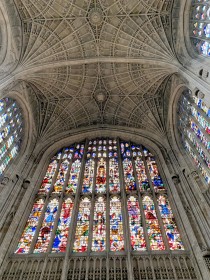 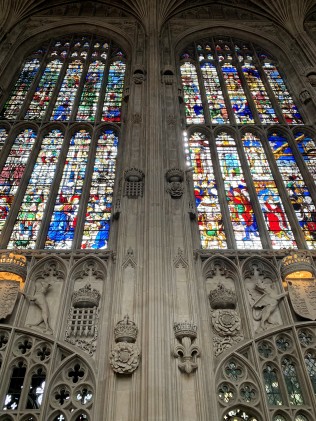 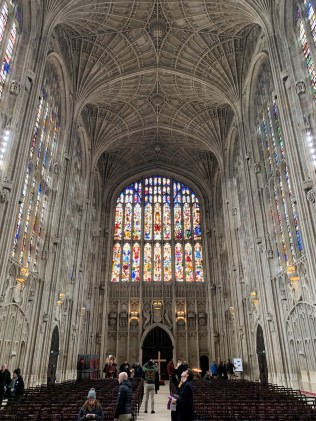 Henry VIII took over the completion of the interior, paying for almost all the stain glass windows.  If you look closely they all tell stories from the bible, but oddly some of the main characters (including baby Jesus in the left panel ) look somewhat like  Henry VIII with red hair??

During WWII, they took all the windows out as they were worried they would be bombed.  They stored them under ground and it took 5 years to put them back in after the war! Today, they carefully regulate the internal temperature to ensure the care of the beautiful Reuben’s painting displayed there.

It was definitely worth the cost to have the guide in these colleges to learn about the wonderful histories. A Staycation in Cambridge – April 2019 My next Cambridge weekend was a special one and we stayed in a hotel in the heart of the city along the river.  It was great being able to walk out of the door and enjoy the sights of the city.  Not to mention the view from the room which was lovely, particularly at sunset. 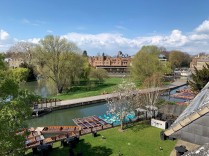 We enjoyed many of the well-known Cambridge past times, ticking off some more of those ‘111 Places in Cambridge that you shouldn’t miss” (though I must admit I am not getting through them very fast!) 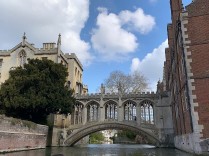 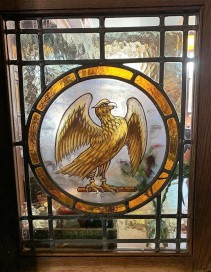 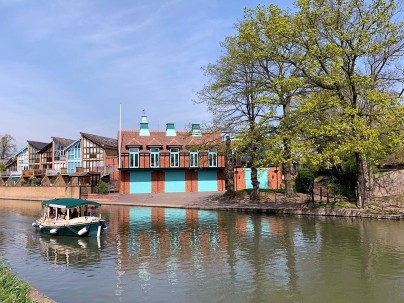 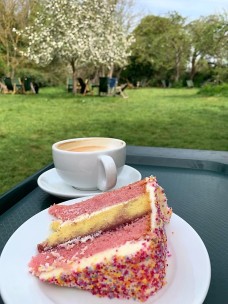 Wisteria hysteria (and other blooms) – May 2019 One of the special things about early summer is the Wisteria, as many of the old buildings are covered in the climbing bloom.  I had found a little walking tour online which was supposed to take you to the best of the Wisteria around the city. Unfortunately I was probably a week or two too late to get the Wisteria at it’s best  🤦🏻‍♀️ and the rain didn’t help, but it wasn’t cold and I do love walking around the city, finding different corners I have not already explored,so it was not a total loss lol. 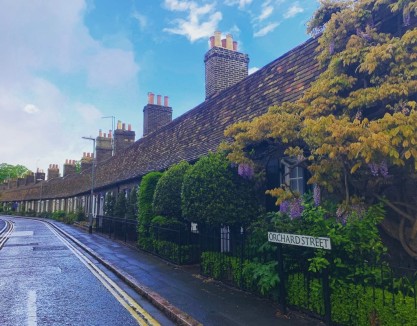 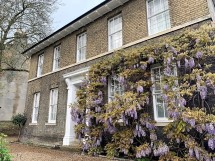 It was also lovely to see  Jesus College with all the scaffolding gone from pedestrian entrance (which was there when I visited the first time).

Wisteria is not the only flowers in bloom at this time of the year, the countryside is full of colourful rape seed fields – beautiful fields of gold. This one was right by my office so took advantage of a short lunch time stroll to get up close and personal with it lol.

“In proud memory of their valor” – The American Cemetery – May 2019 “The Americans whose names here appear were part of the price that free men for a second time in this century have been forced to pay to defend human liberty and rights – all who shall hereafter live in freedom will be here reminded that to these men and their comrades we owe a debt to be paid with grateful remembrance of their sacrifice and with the high resolve that the cause for which they died shall live eternally”.  This is one of the inscriptions found on the wall of the Cambridge American Cemetery. 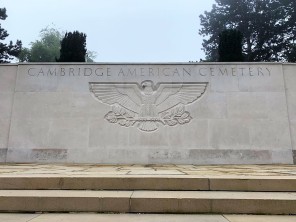 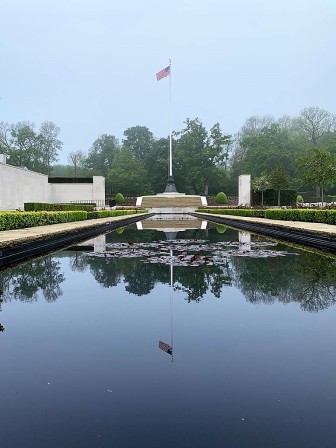 I must admit I was not aware the cemetery even existed until I drove past it one day on the way to somewhere else and I made a mental note to be sure to return for a visit.  The morning I choose was a misty one and I was there early so was the only person there and it was beautiful .  Perhaps an odd thing to say about a cemetery, but there was just a peace about it. 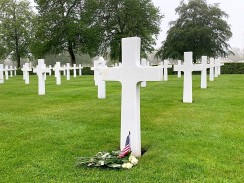 The cemetery is multi denominational (I saw crosses, Latin crosses as well as some graves topped with the Star of David) and is home to the graves of over 3,800 Americas and a memorial to over 5,000 more who are still recording as missing during WWII.  One of the missing remembered here was Big Band legend, Glen Miller, who was lost when his plane disappeared over the English Channel in 1944. It has a beautiful chapel with a stunning mosaic ceiling depicting angels escorting planes to heaven and stained glass windows bearing state seals and a really interesting visitors centre which documents America’s involvement in the war in Europe.

It truly is a beautiful monument to those who fell. Bury St Edmunds – May 2019 Searching the internet (again) for an informative walking tour of places near home, I came across one for the historic market town of Bury St Edmunds, so off I set. My walk started at Abbot’s Bridge which dates back to the 12th century and once linked the street to the Abbey vineyard across the river Lark.  I then entered the Abbey gardens – beautiful gardens with ruins of the Abbey dotted around it. 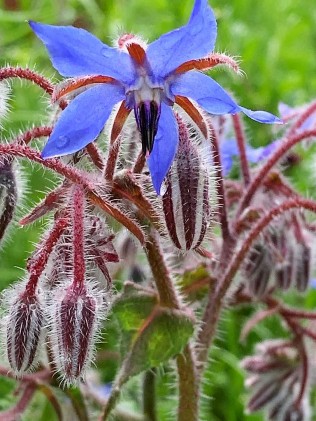 The Abbey of Bury St Edmunds was once among the richest Benedictine monasteries in England, until the dissolution of the monasteries in 1539.  It was also the burial place of the Anglo-Saxon martyr king Saint Edmund who was killed in 869, hence the name of the town that grew around the monastery– Bury St Edmunds (not a lot of imagination used there)! Much of the wealth of the Abbey came from the taxes the monks charged on pretty much everything, including the collecting of horse dropping in the street!  They ran the Royal Mint and each monk was entitled to 8 pints a day from the Abbey vineyard! The local population had had enough of the Monks by the 13th/14th century and started to revolt and the Monastery suffered extensive damage and the it’s decline began. The Abbey Gate was also destroyed during the Great Riot in 1327 and had to be rebuilt in the 14th centre, but the Norman Gate/Tower dates back to between 1120 and 1148 and has traditional served as the bell tower for the cathedral. 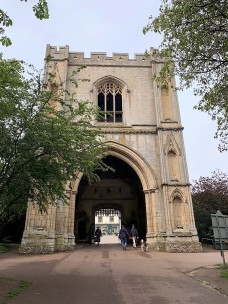 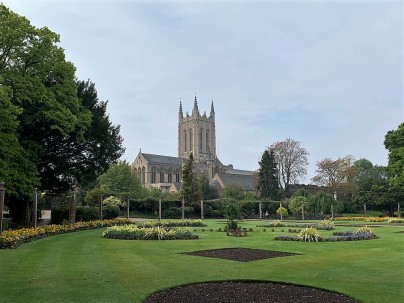 Once dissolved, what was left of the Abbey became somewhat of a quarry and you can see the Abbey stone around the town in the walls and houses. 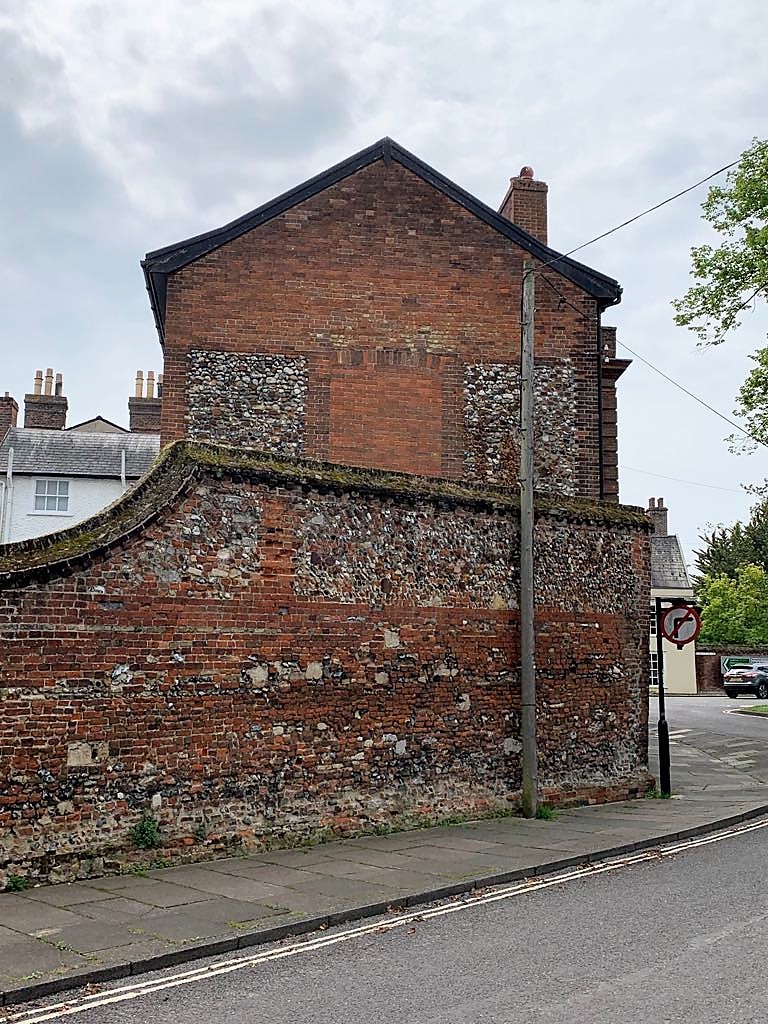 On part of the ruins of the original monastery, there is a plaque commemorating the spot where, in 1214, the barons of England swore to compel King John to sign the document now known as the Magna Carta! (The Magna Carta, or The Great Charter, is considered one of the most important documents in history, establishing that everyone, even the king, is subject to laws and guarantees the right to justice and a fair trial for all.  Still the foundations of the law today.) 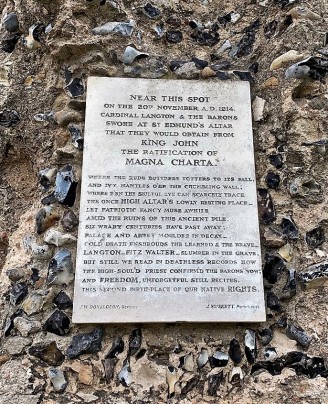 During WWII, there were a lot of American personnel based in and around the town and keeping with the American war theme, I visited the beautiful rose garden dedicated to them.

Past the dominating Cathedral and you reach the Martyr’s Memorial, which remembers the 17 protestant martyrs who were killed for their beliefs during the region of Mary I (or Bloody Mary as she was known) as she wanted to return England to Roman Catholicism. Then on to St Mary’s church, completed in 1427 and the burial place of Mary Tudor, Queen of France and sister of Henry VIII (and the same Mary who was killing protestants!).

On to the more modern part of town and Bury St Edmonds has the oldest provincial civic building in England (built as early as 1220).  The Angel Hotel, built in the 1830’s is actually mentioned in Charles Dickens novel “The Pickwick Papers” and the final point of interest in my walk that day was the “Pillar of Salt”, a Grade II listed road sign.  It was listed in 1998 being described as “individual and probably unique” and is thought to be the first internally illuminated road sign in the country! 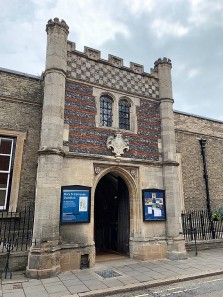 Enough ramblings for now, but stay tuned for the next installment of Roaming Ramblings