To avoid any possible Brexit fall out I had planned to spend April in the UK – of course the Brexit date moved and at time of writing no one really knows what is going to happen so I may end up travelling slap bang in the middle of the mayhem – but we just don’t know! I also had a visit from someone special and planned a road trip to Scotland and a few days playing tourist in London. The ‘staycation’ started with a night at a lovely country hotel near Cambridge. Nothing much was done but relaxing which was just what was required. 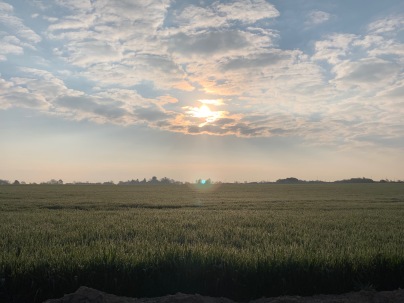 A fun quirk about car insurance here in the UK (on top of the exorbitant cost) is that you have to add each additional driver at additional cost and an admin fee!  These costs meant it was not much more expensive to hire a car for our road trip, rather than run the wear and tear on my car! 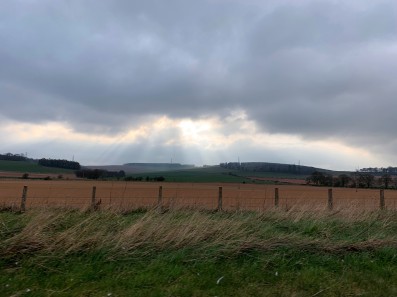 Our drive up to Scotland was uneventful with not too many traffic delays and we had a lovely stop in the borders to visit my uncle who I had not seen for many years.   Then a short hour later we were in our Air Bnb in Edinburgh ordering a take away! As with almost all my trips these days, minimal time takes carefully planning to maximise experience and this trip to Edinburgh was no exception. Day one we had an early start to join a tour with Hair Coo tours into the Highlands and up to Loch Ness.  Our guide John, was a proud Scots and was absolutely hilarious throughout the long day.  Sharing interesting Scottish tidbits and stories with us as we traveled.

We travelled north out of the city, passing The Kelpies –  30 metre high horse-head sculptures which are apparently the worlds largest equine statues!  The name comes from the shapeshifting Scottish water spirit, whose favourite shape is that of the heavy horses of Scottish industry who use to pull the barges and coal trains. Our first stop of the day was at Deanston Whisky distillery – an important point to note, Scottish whisky is not spelt with an e i.e. whiskey.  Who knew?? The building that the Deanston distillery calls home was built in 1785 as a Cotton Mill which was at the forefront of Scotlands move from agriculture to industralisation during the industrial revolution. To staff the mill, they built a self-contained village which still forms the centre of Deanston and even issued their own currency called Deanstons (due to the shortage of coins they branded old French and Spanish coins with the Deanston stamp).  Of course, these coins were only redeemable in the grocer and haberdashery of Deanston. Deaston was also the first village in Scotland to use gas lighting, 45 years before its neighbouring village of Doune!  Incredibly, the factory installed electical turbines in 1949, which to this day provide all of the electricity using water from the near by river.  They were certainly early adoptors of the need to move to a sustainable power source. When the cotton industry declined in the 60’s, the Deaston mill closed up business, but the buildings were converted to a distillery with the first bottle of Deaston Highland single malt scotch whiksy being produced in 1974. The water from the near by River Teith is not only used to power the plant, but also used in the production of the whisky and many of the casks they use come from Kentucky. Oddly, in the US, they can only use casks once when making whisky (apparently the sole reason for this is to keep casks makers in work).  So Deaston buy the once used kegs for a much cheaper price than new ones, other kegs they use come from Europe and have had red wine in them and some have previously be used for rum etc.  The red wine and rum ones are more expensive but are used for special edition whisky. 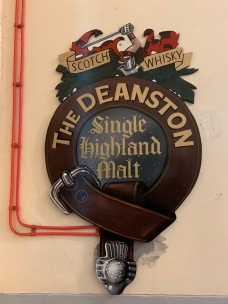 They expect to get 100 years use out of the casks before recycling them in to flower pots, trays etc. As we toured around the distillery, we learnt all about the Mash house (which has the largest open top Mash Tun in Scotland).  The mash tun is where the crushed grain is mixed with hot water to create a porridge type substain in whichenzymatic conversion of the startch takes place. 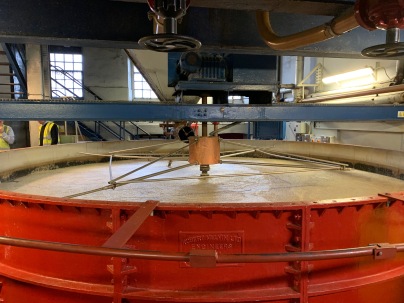 I won’t bored you (of maybe I already have lol) with the whole whisky making process, but it is important to know that Scottish Single malt whiskey has to be in cask for at least 3 years and 1 day It has to mature in oak cask and all the ingredients must come from Scotland.   It must also have a minimum 40% alcohol though of course it can be higher! 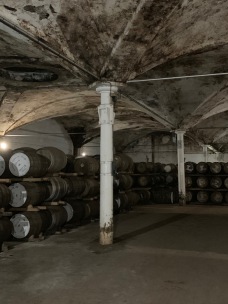 The oldest whisky the Deanston distillery has is a cask sealed in 1974.  If bottled today, they could sell it at approximately GBP5000.  But they are trying to make it to 50 years when they will get GBP11,000 per bottle.  The alcohol evapourates over time (this is the ‘angels share’) so the long it stays in the cask the less liquid there is, therefore the fewer bottles and in turn the higher cost per bottle. 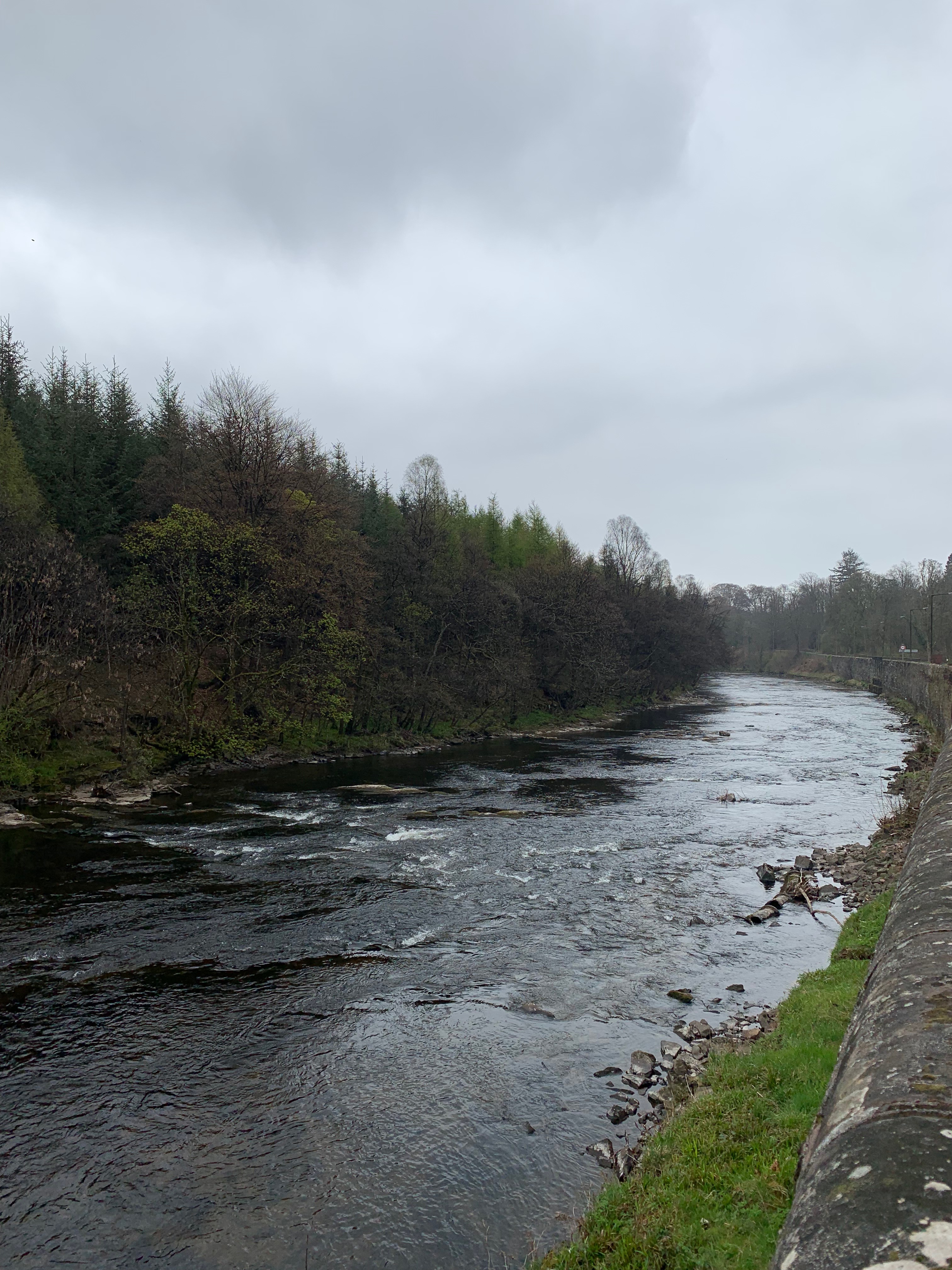 I must admit, although learning about the history of Deanston and the whisky making process was interesting, I was more interested was the origins of the saying “armed to the tieth”.  I always thought it was teeth but no, the saying came from soldiers not being allowed to take weapons in to Stirling so they would have to leave their weapons when they reached the River Teith – on the banks of which the Distillery sits. As we travelled north through the Highlands, the cloud and rain closed in.  Our guide kept saying the weather would clear but it seemed not to be the case.  They like rain in the Highlands as it is just whisky ready to be made lol.  Despite the weather, Glencoe was beautiful and we briefly (and I mean briefly) braved the wind and rain to jump out of the bus to take a photo. 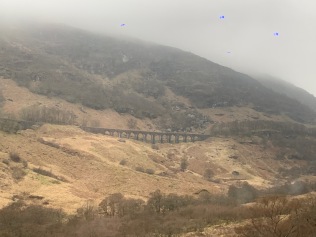 Another ‘did you know’ moment … did you know that there are over 36,000 lochs (an inland body of water) in Scotland??  About 6,000 of those are sea lochs – obviously these have links directly to the sea. Of all these lochs, Loch Ness is the biggest (by volume), at over 220 metres deep and 36 km long.  In fact there is more water in Loch Ness that in England and Wales combined. We had an hour or so for lunch and to explore a little bit around the town of Fort Augustus, with a population of only 640 people, it is bolstered by the hoards of tourists that flock there daily to visit the famous loch.  It was interesting listening to the locals speak to each other and trying to understand what they where saying.  Although speaking English, some of the accents were so thick lol.

Thankfully the rain had cleared as we boarded the Spirit of Loch Ness for a cruise on the lake.  The boat was in true Nessie hunting mode with radar and sonar to show an sign of the Loch Ness monster – sadly no viewings that day except for the sticker on the windows 😂 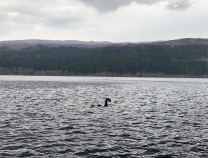 Travel certainly is an education and I am always learning something new – I didn’t know that a fault line ran down the middle of the loch and that the sides of the loch look so different as one side was one part of North America and the other side was part of northern Europe. Another interesting fact about Loch Ness is that the water is very dark.  This is because of peat in the surrounding hills and the tannins in that peat – you also find tannins in tea, and of course the famous Scotch whisky. The rain picked up again  as we got back in to the bus and headed south back towards Edinburgh. Despite the cold weather, I still had to try the famous Whisky ice cream from Scotch Corner of Pitlochry.  Apparently it has so much alcohol in it they can not sell it to people under 18 or people who are driving.  The day had started with whisky so I though I may as well finish it with the same 👍🏻. I must admit I preferred the ice cream to the actual whisky we sampled at the distillery (of course I far prefer ice cream to whisky at any time)! The next day there was finally a little blue sky for my free walking tour of the city.   The tour guide was an Australian (though he said his father was Scottish) and a Shakespearean actor.  He definitely made it interesting and very theatrical and he had clearly had done his homework but I made a mental note to look harder for tours run by locals (like yesterday) as they all have their own stories rather than just information learnt from a book. 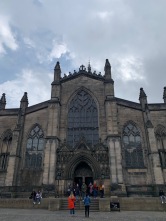