We left Cuenca at 3.30am and thankfully I managed to get a few hours’ sleep before arriving at the border town of Huanquillas 4 hours later.  It was poor timing as the Super Rugby final was on at the exact same time.  My team, the Crusaders, were playing and I was trying to keep up with their progress on the journey but unfortunately, we had no reception for half the journey through the mountains!  When we finally got to the border I was pleased to see they had won which is the most important thing right?

It is odd but border towns all over the world seem to be the same and this one had a familiar feeling to it.  I was trying to think back just how long it has been since I have done a land crossing at a border and concluded it was probably Ghana to Togo back in 2012 (but that’s another story!).

After queuing 1 hour to leave Ecuador we took a crazy fast taxi across no man’s land to Peru immigration – I am sure the taxi driver halved the 10-minute journey to 5 minutes despite speed humps and an open boot with suitcase precariously balanced in the back.

Our guide managed to convince the border control staff to let us in to the Ecuadorian immigration queue so we could avoid all the Venezuelans (fleeing the current crisis in their country) in the other queue we but still a wait of more than 1.5 hours for our entry stamp – it seems that Ecuadorians are not good at queuing and we had to spread ourselves widely across the line with elbows out to stop other people pushing in front – they were not subtle about their queue jumping.

As the guide was not with us, I got the opportunity to use my now vast (ok, a slight exaggeration) Spanish immigration vocabulary to help the others in the group through the questions about previous visits to Peru, length of stay etc.  Unfortunately, they were not happy with the paper work help by a Chinese boy (in the other group we were travelling with) or the Hong Kong girl in our group as Chinese typically need pre-approved visa for entry.

The downside of small town border crossings is that the staff are not normally up to date with the details of the visa requirements of all the different nationalities as they normally only deal with local immigration and in fact, both did have the correct paper work.  Thankfully it only took 10-15 minutes for them to allow Florence (from Hong Kong) in to the country, however the Chinese boy was not so lucky so we had to continue on  him so we did not miss our flight.

We had a 20-minute drive to the airport to Tumbes (described by the Lonely Planet as one of Peru’s top 10 shit holes)! A couple of us were worried we would be stuck there as for some reason we were on standby while the rest of the group had confirmed seats  on the one flight a day to Lima 😬.  Thankfully everything worked out ok, we all got seats on the plane, and at the last minute the Chinese boy turned up, having finally been allowed in to the country.  I was surprised to also be able to get a coffee so I was happy as starting to fade after only a couple of hours sleep.

Upon our arrival in Lima we meet our new guide (Jorge) and later, the four new group members (2 of the Ecuador group left us).   The four new ones are all Australian, making a group of 8 Australians and 2 Kiwis.

We only had one day in Lima and we spent most of it on a walking tour in the city centre which was declared a UNESCO World Heritage site in 1988 for “its originality and high concentration of historic monuments constructed in the time of Spanish presence”.

We caught the very efficient bus system in to the centre, with fancy bus stations and its own bus land right through the city and were greeted by yet another parade.  It seems South Americans love a good parade.  This time is was more of a dance off between groups, each dressed in bright, sparkly customs (male and female), accompanies by their own marching band.  It was massive with over 50 different groups ‘competing’.   It all seemed very friendly so it was a little disconcerting that there were riot police standing by! 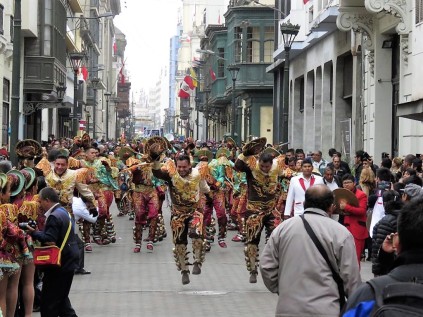 We later discovered that August 5th is when Peru celebrates the Festival of the Virgin of Copacabana with a series of religious and social activities and this is what we had stumbled across.   The festival also meant that there were special church services at the main churches in the city. 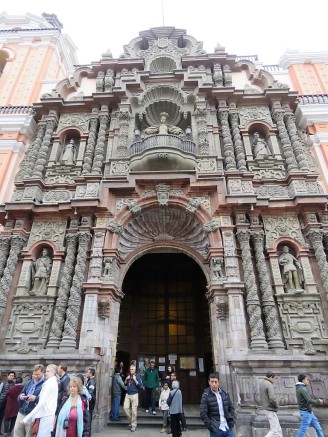 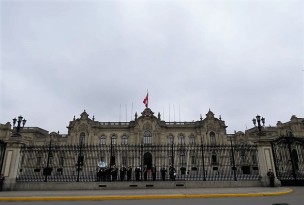 We then timed it perfectly to see the changing of the guards at the presdential palace – full of the pomp and cememony I have come to expect from South America! 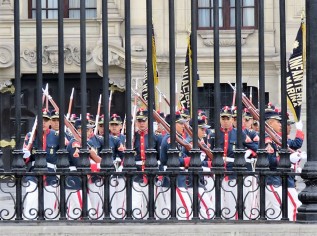 Next, we went in to the church of San Francisco and were just in time to join one of the Catacombs tours in English.  The church itself is one of the best preserved in the city (and there are a LOT of churches) and was built in the baroque style of the 1600’s, having been established in 1540. 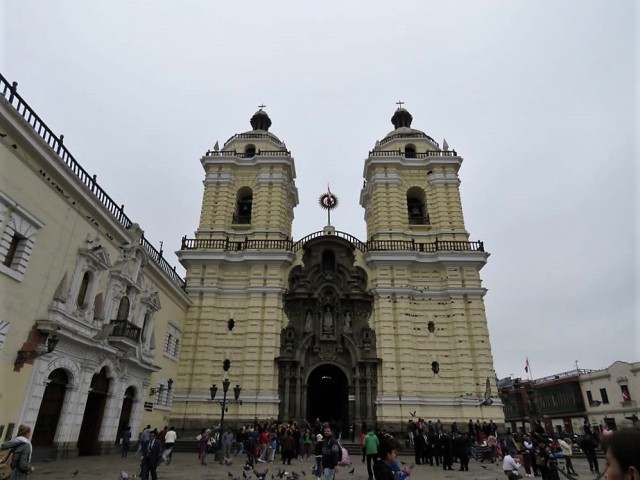 We started the catacombs tour in the adjoining monastery that has an incredible collection of ancient religious books, some apparently bought over by the first Spanish settlers.  The rest of the monastery was also beautiful, with beautiful tiles and frescos.  But, what most people come for are the catacombs which are part of Lima’s original cemeteries, which were built under churches.  Apparently, there are approximately tens of thousands of people buried under San Francisco and many of the remains are exposed, stacked in strange patterns and/or arranged by body part so it is very difficult for them to determine the exact amount of people buried there. 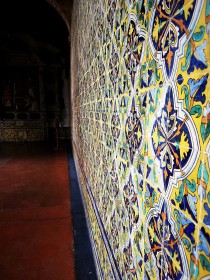 After lunch and amazing churros filled with dulce de leche (a local delicacy – much better than worms!)  we headed back to our hotel to get ready for our 6am pick up for our trip back to the bus station.

In Peru is seems that bus stations run more like airports – we needed to get our bags weighed (and they charged for bags over 20kg!) and show our passports to ‘check in’.  Thankfully the buses were also like airplanes with pillows, blankets, reclining seats and seat back tv screens (definitely an upgrade from the Ecuadorian buses we travelled on – not that they were bad).  And we even got a meal onboard!  Ok, it was just a sandwich and small piece of cake but it was still food!  The best thing was the glass of the infamous Inca Kola – which tasted like a cross between IronBru and Cream Soda and nothing like Cola.

It was a 4-hour journey to our next stop – Paracas, a small town on Peru’s west coast, and a gateway to our next activities at Paracas National Reserve and the Ballestas Islands. 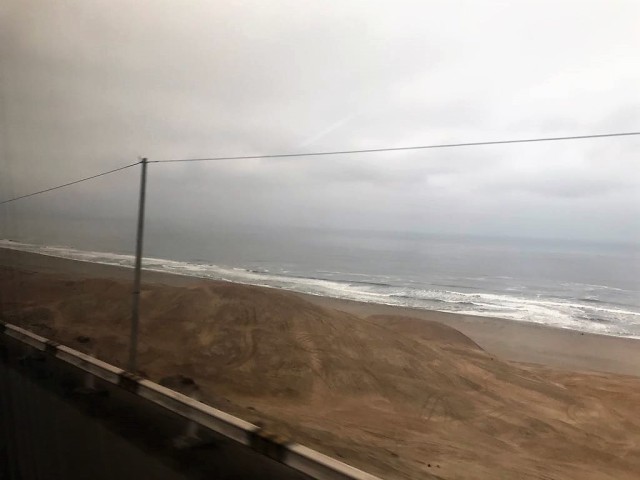 It was a very strange desert landscape along the coast line with fog most of the way though we did pass some small villages with white buildings by the sea – a little reminiscent of small villages in Greece.

Upon arrival in Paracas, we walked out the back of the bus station and our accommodation was right there – there really is not much to the town of Paracas! 😬  (To be fair there really is more than that but it did not seem so at the time lol.)

We were quickly rushed off on a tour of Paracas National Reserve – our local guide Luis, was amazing and had a great presentation style that made us all think.  He described the reserve as “a cold desert by the sea, in the tropics, that has clouds but never rains, and is home to a colony of penguins”! 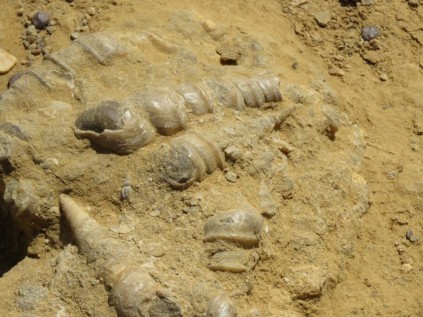 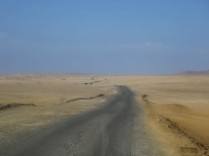 There were shell fossils from 40 million years ago but absolutely no plants and all the birdlife was concentrated on the waters edge.  Apparently, the reserve has the largest concentration of bird life in the world, but that of course includes the islands which we were to visit the next day. 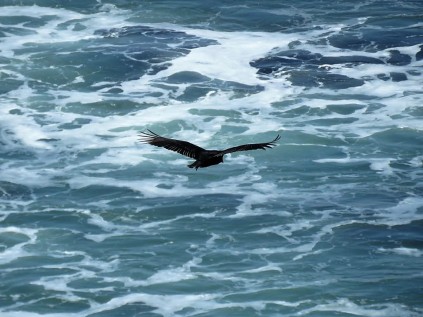 I did still manage to spot the beautiful Inca Terns, the not so beautiful Turkey Vultures and Peruvian Boobies flying around the coast line.

The following morning, we headed out by boat to visit the Ballestas Islands – sometimes known as the poor mans Galapagos, as it is much cheaper to get here!  First, we stopped along the mainland coast to see the Paracas Candelabra – a prehistoric geoglyph.  Apparently, the design is cut 2 feet in to the soil with stones placed around it and is 180m tall.  Pottery found nearby has been dated to 200BC, the time of the Paracas culture, but no one really knows who or why it was created. 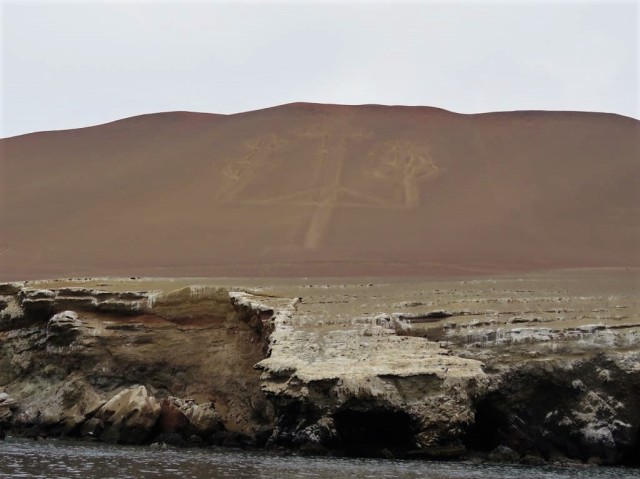 We then headed out to the islands, situated just a short boat journey off the mainland coast,  the large speedboats (holding 40 passengers) certainly did not get up to the speeds those in the Galapagos did so it was relatively smooth ‘sailing’.  The islands are home to thousands and thousands of birds, mostly notable, Peruvian Boobies, Peruvian Pelicans, Inca Terns, Red legged Cormorant and the most infamous of all, the Humbolt Penguins who are really the star of the show! 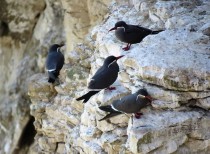 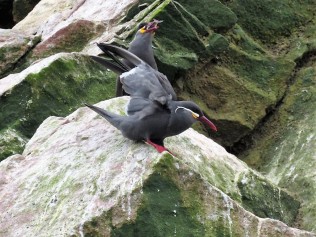 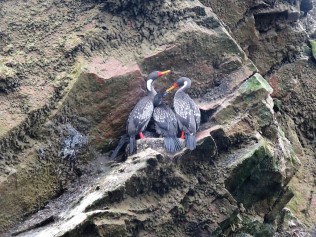 We came across a group of 10 or so, who delighted us by lining up to jump in to the water right in front of us.  As wonderful as it was, personally it still ranks second to my Galapagos Islands! 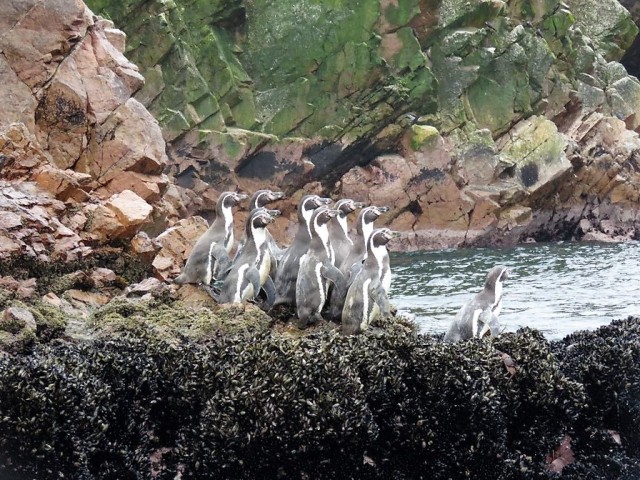 With no time to spare, we were back on another bus heading further south.