One of the many positives about staying with a family, is getting to enjoy local family life.   My host had a friend from the mainland visiting and had arranged a full day out of sightseeing for us all on Sunday.

Although the Galapagos Islands are pretty much smack bang on the equator they are not the tropical paradise many expect (though of course they are a paradise) and they have two distinct seasons.

The dry, orgarua, season, which runs from July to December. “Garua” refers to the fog and mist that common hangs on the higher elevations during this season. The hot or wet season lasts from January through June, with March and April generally being the wettest months

Now it is the Garua season which has less rain than other times of the year and is slightly cooler due to Humboldt Ocean currents – of course this means the water is slightly colder than earlier in the year (so we are diving in 7mm wetsuits!), but that is the current that brings in all that great nutrient rich waters which brings all the marine wildlife with it!

With all that being said there is rarely very little variation in the forecast as you can see from the photo below!

What is even more interesting, is that as you cross the island of Santa Cruz (approximately 40km from one side to the other and an elevation of 864m), you can literally pass through 2-3 different weather systems!

Despite the weather, it was a great day out.  We walked through the lava tunnels (including have to crawl in one part – though we passed a couple who had taken their bikes through which must have been a challenge), visited a tortoise ‘ranch’ (in fact the same one I went to on my first day in the islands last year) and the to Playa el Garrapatero, a lovely little beach.  Unfortunately, as it was overcast, the water was too cold for me to swim though it did not put others off.  I spent a lovely hour exploring the lava formations, rock pools and taking photos of birds – because you can never have enough photos of Galapagos birds right? 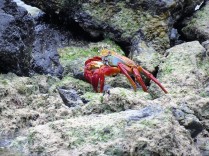 Our final stop was a reserve area (the Reserva Ecological Cerro Mesa) for a viewpoint of the island – according to their brochure the scenic look has a “view of countless bays, islands, inlets and cliffs … from a 500m elevation I meta and cliffs”.  Of course it was all covered in mist so all we saw was mist 😂.  But, we did see the volcano crater – the Cerro Mesa crater is allegedly the “world’s largest collapse of a subterranean magma chamber” – (1km in diameter and 130m deep).  You could walk down but it really was not the right weather for that!

I had to rush to finish my homework over breakfast on Monday (that will teach me to leave it to the last minute) – there were a couple of questions I asked my family for help with and they did not know the answer!! My host ‘Mum’ even texted her father who is a Spanish teacher!  This week I had a different teacher for three days as my normal teacher was away.  I really enjoyed his lessons and the fact that he didn’t give me any homework 🤪.

Now I have a routine, I am trying to go for a run/walk 3-4 days a week – the aim is be fitter when I leave here than when I arrived as I really do need to be fitter for the next physical challenge in about 6 weeks’ time – the Inca trial.  Sometimes I run around the town (often getting lost in the narrow little ‘suburban streets) and sometimes I run the track down to the beach and back (a 6km round trip).  Good to be getting out and doing some exercise as well as being able to explore this little piece of the island.

On Tuesday the news came in that Sierra Negra on Isabella had erupted! I had hiked to the rim of its caldera last year and had contemplated doing it again this year but access to the site had been suspended since earlier in the year because the increased activity!  Now 3 days before I was planning to visit the island it erupted ….  I was concerned that I might not be able to go to the island, or, if I could go would I be able to see it. (FYI I did get to go to the island but no I could not see the volcano, more about that in another post!)

To finish off the week I went diving again.  This time to Gordon Rocks, a dive site about 2 hours sailing away from Santa Cruz. It was another two amazing dives with lots of fish, sharks, rays and turtles.  Highlights for me was seeing a turtle getting it’s shell cleaned and swimming through the middle of a school of barracuda only to be taken by surprise by a turtle right next to us.   Finally and most exciting was a Mola Mola (or Sunfish) – it was relatively small for a Mola Mola (they are the heaviest known bony fish in the world and adults typically weigh between 247 and 1,000 kg).   But nevertheless I was thrilled to see it! 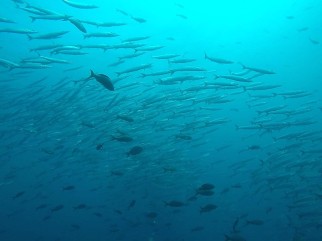 The sun came out for the 2 hour sail back (and for once I actually enjoyed the boating experience), relaxing on the deck in the sun.

Despite having an early start planned for Saturday (it seems every morning is an early start!) I decided to take a walk through the town on Friday night and I bumped in to a girl I had met earlier in the week watching the football.    She had been working on a super yacht until it hit a rock and broke its rudder. The boat was now stranded on the Galápagos until a new rudder could be built (in Germany) and then shipped to somewhere (maybe New Zealand) to be installed!

She was on her way out of the country after waiting around over a month with no progress 😬 after months of working on a boat with an all male crew (except her) she was welcoming of some female company and I was happy for some good conversation in English! 🤪. It was an unexpected but nice evening even though the drinks were probably not the best idea as I was ocean bound to Isabella early the next day 😔.