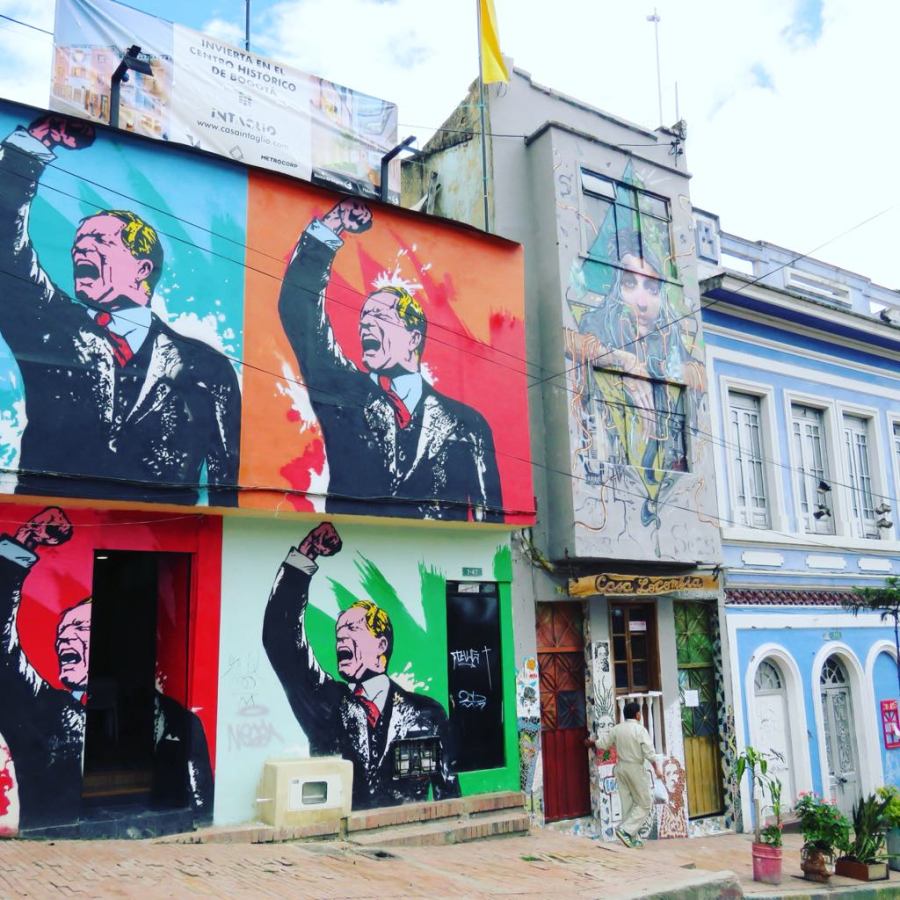 It was a 3am start from Buenos Aires to head to the airport for my 6.30am flight to Bogota.  The taxi ride (yes I did have to get a taxi at 3am in the morning) was another journey in BA with a 80’s/90’s music loving driver!

The flight to Bogota was uneventful with the highlight of an amazing view of the Amazon rainforest and Amazon river as we crossed over it somewhere between Peru and Colombia.

Bogota was overcast when I arrived and it turned in to rain just as I started another walking tour – that seems to be a bit of a theme 😂 but I thought a 4pm tour would help me stay awake till it was a decent time to go to bed!

The walking tour took me through the La Candelaria area – the oldest part of the city.  It had a similar Spanish look and feel as other South American cities, founded by the Spanish with pretty cobbled streets and colour building facades.

Apparently most Colombian cities are laided out in a grid system, carreras or avenues running east to west and calles (streets) running south to north which thankfully makes it fairly easy to get around. 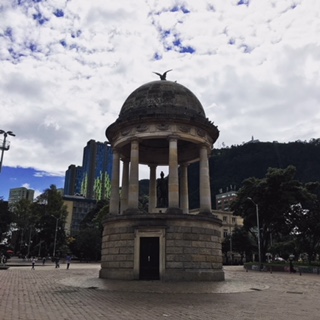 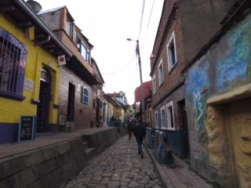 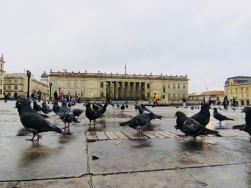 We got out of the rain in a Forgery in an old monastery where they made swords for the TV programme “Game of thrones” and then on to Plaza de Bolivar which was the heart of the original town.  The square houses the Capitalio National (the National Capital building) as well as the Palace of Justice.  It is also has the obligatory statue of Simon Bolivar (who liberated Colombia from the Spanish) and is full of pigeons.  Families come here to feed them which means they are not shy in coming close to people and are somewhat annoying!

One of the highlights for me was the Museo Botero with many painting gifted by the artist himself, Fernando Botero, a Colombian artist famous for his portrail of “chubby” things – men, women, animals, oranges etc.  I had spotted a statue on the way in to the city of a chubby naked man, riding a chubby horse and was it amused learn that it was designed by the artist as a favourite childhood memory of his was that of his father sitting naked on a horse (I guess it is not our place to judge and no idea if his father and his father’s horse were chubby😂).  I look forward to seeing more of his work in Medellin in a few days times.  Another great thing about this museum is that it was free as Botero believed that his art should be available for all the people.

I grabbed a couple of empanadas on the way back to the hostel for dinner and managed to stay awake till a fairly decent 9pm – unfortunately, although the hostel itself was quite, the street it was on was not!  And a typical Friday night in Bogota played out, just outside my room’s window.  Thank goodness for sleeping pills which meant I managed to get sleep.

The next morning I dropped my bags at the new hotel where I would be meeting my group for the tour and started the walk up to the base of the hill.  I had contemplated joining the many people making the 1.5-2 hour hike up Cerro de Monserrateto and its church, towering 3150m above the city but decided against it in favour of the ‘sketchy-looking’ funicular (as described by the guide book).  It felt pretty solid to me as it crawled up the hillside to the top in just a few minutes. 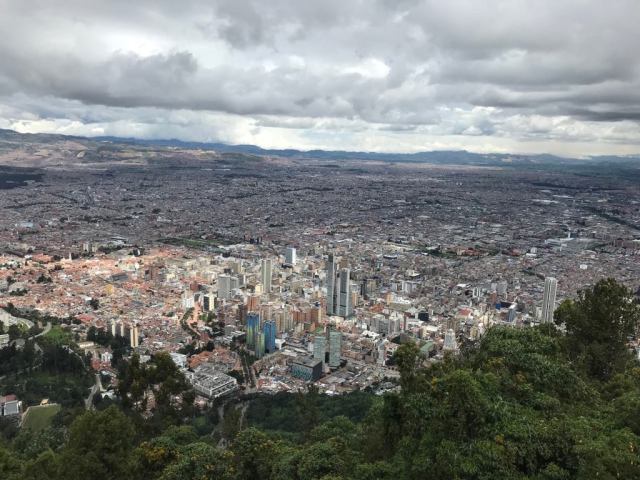 I spent a little bit of time wandering around the complex enjoying the views of the city below, before heading back to the funicular and back down to the sprawling city below.

I had initially felt bad about not walking up the hill, but when I got down just at the right to bump in to the graffiti tour I had originally thought about doing that morning I took that as a sign that I had made the right decision 😂👍🏻. 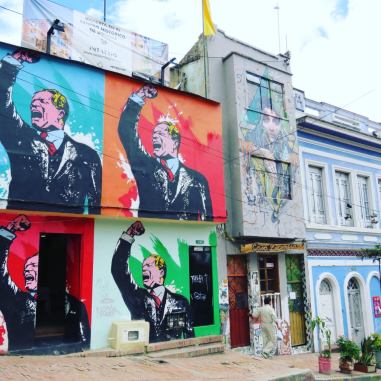 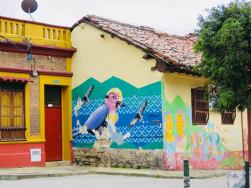 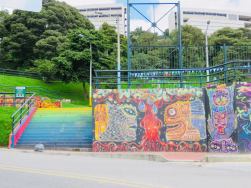 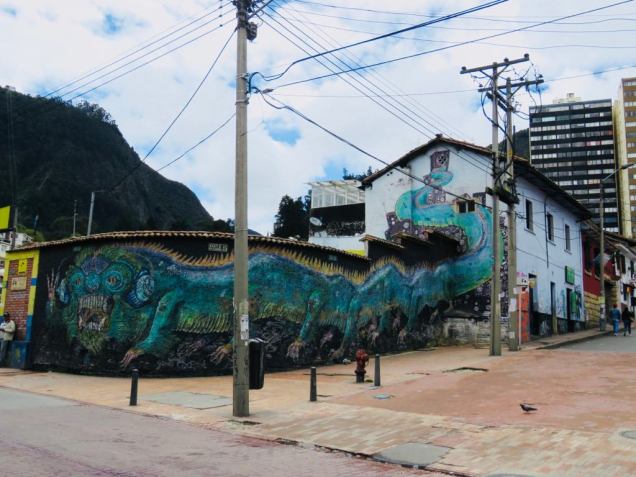 Although I had missed the beginning of the tour, I quickly gathered that the people of Bogota took their street art seriously.  In some cases the property owners asked for paintings to stop taggers tagging their property (people just scrawling their names).  Of course, in some instances it is used as a sort of a political commentary, in others just beautifying a dull facade and of all the art works have great meaning behind the pictures.

I skipped out on the last part of the tour but still had time to kill before the I could get in to my room at the new hotel so I passed sometime in the cities Museum of Gold.  It had really interesting exhibits on the history of gold in Colombia.

I headed back to the new hotel to check in and meet the group I will be travelling with for the next 21 days (though some leave after 9 and others 16 days).  After the welcome meeting we went out for a nice traditional meal of potato soup with chicken and mazie called Ajiaco which is unique to Bogota.  It was pretty tasty though it was an expensive tourist restaurant and that one meal cost about the same as all my meals over the last 3 days put together!  I hope there are not too many of those dinners as I will have blown my budget before I leave Colombia!

Sunday morning and we are back on the road again, stopping at a local market on the way to the airport for our flight to Armenia.  As it was mothers day, the flower part of the market was doing a booming trade with all the amazing locally grown flowers. 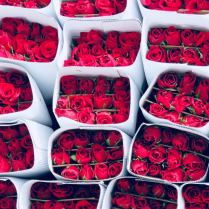 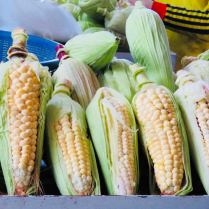 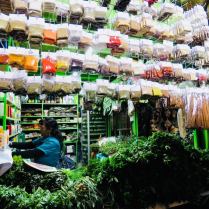 Next stop … the coffee region.