As the bus started off in daylight, we could enjoy the varying landscapes – desert to coast, cliffs above the Pacific Ocean and finally some greenery.  The only good thing about bus journeys at night is that you arrive in the dark and wake up to see where you are … Arequipa did not disappoint.  We are staying in the old centre and it is a beautiful town surrounded by snow covered mountains with beautiful warm sunshine. 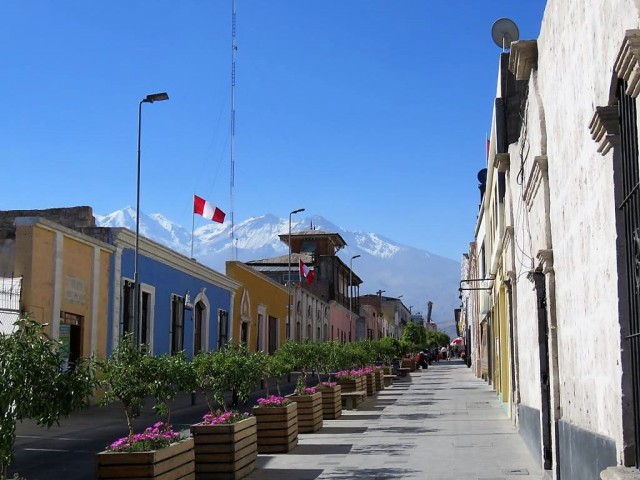 Arequipa is truly a beautiful city situated at 2325m above sea level in the desert mountains of the Andes.  It is Peru’s second largest city, though it only has a population of just under 1m inhabitants.  Founded in on August 15th, 1540 (we could see the city getting ready to celebrate its anniversary) it prospered during the Spanish times and became even more important after Peru gained its independence as it was the capital of Peru between 1835 and 1883. 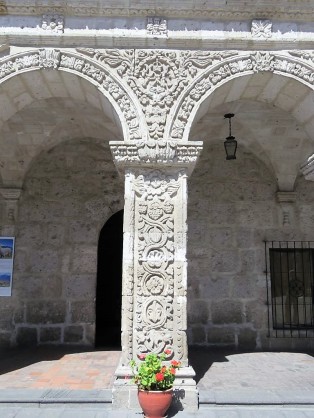 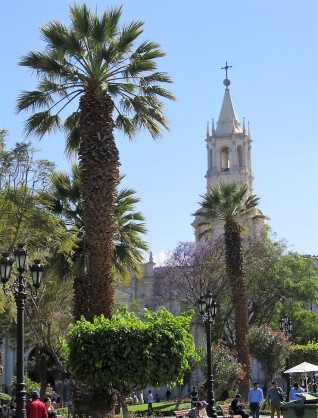 The historic centre is another UNESCO site and is the main draw for the many tourists that visit the town.  It has the nickname the ‘White City’ apparently due to the white volcanic stone used to build the old part of the city, though we have also heard it is because only Spaniards (white people) were allowed to live within the city in colonial times – you decide what to believe!

The city is flanked by several snow-capped volcanos – Chachani (the Beloved), Picchu Picchu (the Top Top) and the impressive El Misti (the Gentleman).

As in most new places we started with a walking tour around the old city centre, starting in the Plaza de Armas which was just down the road from our hotel. 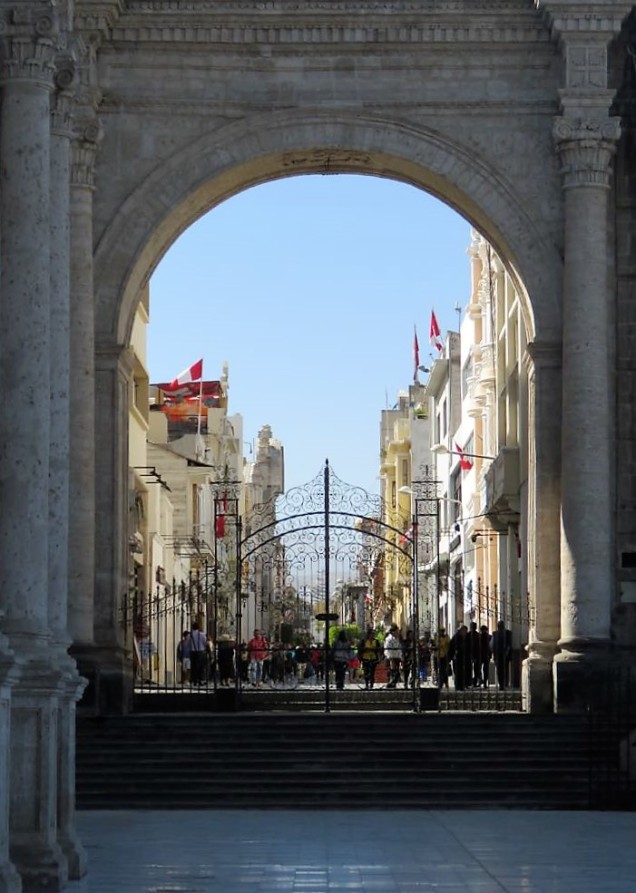 We walked around the area, getting a brief history from our guide before finishing up in the market which is always a great way to see the locals go about their normal daily activities.  We tried the local chicha, which was delicious and Queso Helado – literally Cheese Ice Cream – before you panic it is only named this as it looks like cheese, not because it has cheese in it!  This was also delicious. 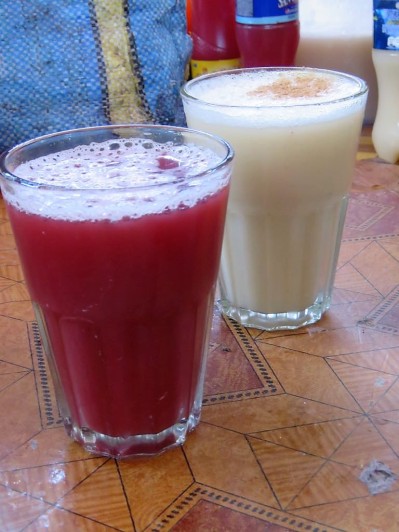 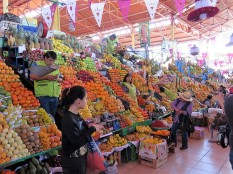 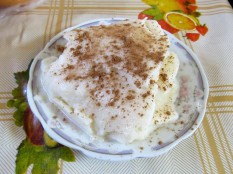 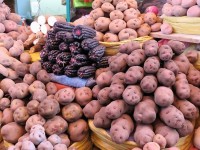 We had the rest of the afternoon free and a few of us decided to go to a museum across the road from our hotel which is dedicated to Juanita the Inca Ice Mummy.  It was a great exhibition, culminating in seeing the mummy itself which is kept frozen to preserve her – unfortunately we could not take photos in the museum.

Juanita was sacrificed as an offering to the Inca Gods sometime between 1450 and 1480 when she was 12 or 13.  Her frozen body was found on Mt Ampato in 1995 – unfortunately she had fallen out of her tomb in to the crater of the volcano when some of the ice melted so her body was partially damaged but most of her remains (including skin, organs, hair, stomach contents etc), garments and the objects left with her were well preserved.  Apparently, they have since discovered another 9-10 similar child sacrifices like this on Ampato and other mountains and there is likely to be more.

That evening we sat on a roof top terrace, drinking Arequipeña beer and watching the sunset over the Plaza de Armas.

After only one day off travel we were back in a bus the next day.  This time it was a private minibus which meant we could stop when and where we wanted which was a blessing!  We were going up in to the mountains and higher up in altitude and had been told to ensure we were drinking plenty of water – what comes with drinking plenty of water?  Plenty of toilet stops!

It was going to be a 5-hour journey in total and I had hopped to sleep a little as I had had a terrible night sleep the night before, which I put down to the altitude sickness tablets I had started taking to avoid getting altitude sickness!  I did not get to sleep but only because there was just too much to see and I did not want to miss out on anything.

I finally got my erupting volcano.  OK, so there was no lava flowing but there was smoke and ash being puffed out at regular intervals.  Nevada Sabancaya has been in this state for 2 years now so it really is nothing spectacular but an erupting volcano nevertheless. 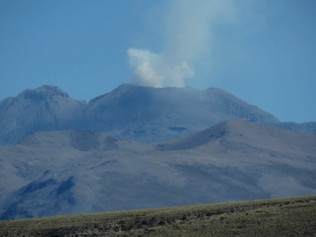 Our first stop was to see the smallest of the camelid family (the family that includes llama and alpaca), the Vicuña.  I do not know how I have never heard of these guys as they are super cute.  They only live in the high Andes and produce small amounts of extremely fine wool, which is very expensive.  Apparently, they can only be shorn every three years and must be caught from the wild.  Its actually the national animal of Peru and appears on the Peruvian coat of arms! 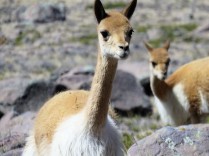 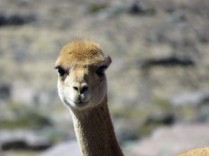 Next stop was for toilets and to drink some Mate Inca tea – a mixture of coca and other leaves to create a tea that is supposed to help with altitude sickness, energy, digestion, stomach problems – pretty much a magic potion that did not taste too bad.  Another common habit hear that we tried was chewing coca leaves – here they take it with a little bit of natural sugar to make it taste less bitter but again it was not too bad.  It is another thing that is supposed to be really good for altitude sickness so I can see myself having it at every opportunity! 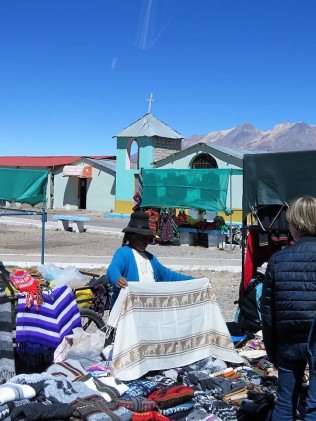 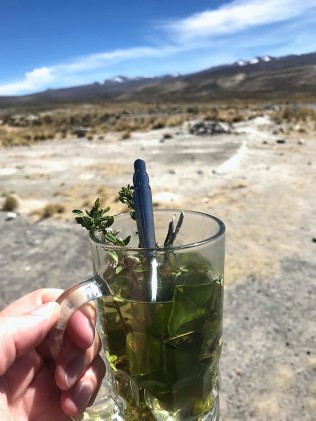 Our next stop was at our highest point of the journey – 4,910 metres above sea level!!  I did feel a little light headed but other than that I seemed to be ok with the altitude thankfully and we only stopped for around 145 minutes to admire the view.  And what a view it was.  Some of it reminded me of New Zealand, but on steroids as everything was that much bigger and higher! 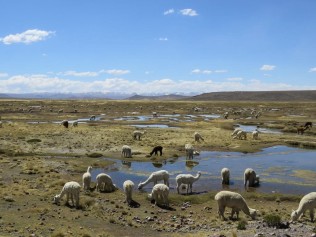 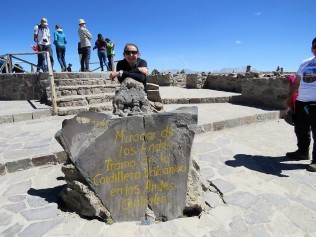 As a slight aside – it is probably time to mention that the theme of 80s/90s American music is going strong in Ecuador and Peru – in buses, in bars, all over the place.  It is always amusing to pass a shop and hear an old Bryan Adams song blasting out. 😂

We were to spend the night in Chivay, at 3600m and the provincial capital of the region.  It was a small, dusty tourist hub and the 3 fights of stairs climb to our room had me panting – I really had no idea how I was going to manage the Inca Trial in a few days’ time!

We had time to enjoy some rustic hot springs within the Colca Canyon before going to a music and dancing show over dinner.  It was all rather amusing and thankfully we left before the audience participation part!  Of course, the musicians had the expected pan pipes (nice to see Peruvian pan pipes in Peru rather than in every other capital of the world!) but one of them also had a rattle/shaker made from alpaca hooves!  Later, we saw them for sale in the market!  That said, we did have alpaca steak for dinner so at least they are making good use of all the animal 😂.  FYI Alpaca steak is good! 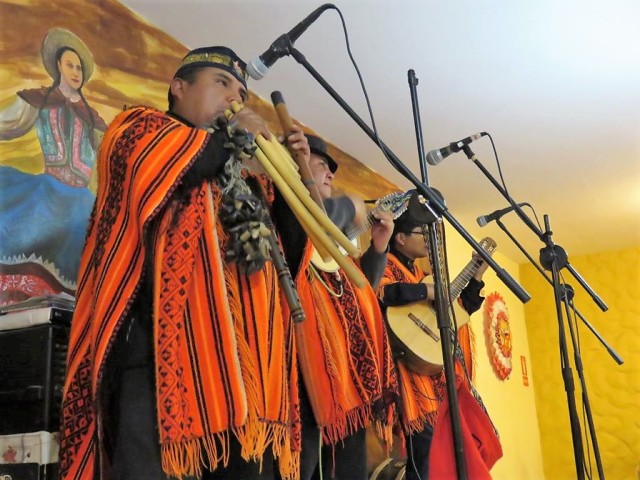 The next morning, we joined the tourist trial in to the Colca Canyon – I must say, this is the first time in my trip that I really feel like I am on a tourist conveyer belt and our first stop in Yanque was no exception.  It was a tiny town, full large buses trying to manoeuvre through the narrow, cobble stone streets which were definitely NOT designed for buses!

I was really not keen on all the photo opportunities with women and their llamas and alpacas – for money of course) – as cute as the animals were.  Despite the fact it was 6.30am, there were children out in traditional custom, dancing traditional dances in the plaza for all the tourists! 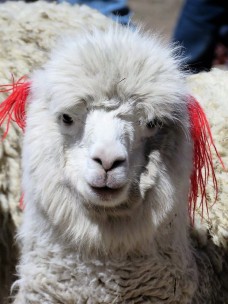 After the tourist circus stop we continued to drive through the Colca valley and in to the canyon – one of the deepest canyons in the world. We made numerous stops to admire a small section of the 20,000 hectares of agricultural terraces – some dating back to pre-Inca times and which are still used today.

Of course, everyone knows of the Inca wonders in Peru but there was so much happening prior to the Incan times e.g. the Nasca and Paracas cultures and their lines and cultures with massive agricultural and head deformities (the technique of head flattening by binding wooden planks to the head of babies to distort normal growth).

But back to the Colca Canyon and the main reason we went there – the Andean Condors, the largest vulture in the world with a wingspan of 2.1 – 2.7 metres.   We were lucky to see 2 young ones sitting by the road when we first arrived and then 4 adults soaring around the cliffs of the canyon on the air currents.  There were truly wonderful to see.

Again though, the shortest of uphill walks and I was getting out of breath!!   Damn this altitude!

On our way back through the canyon, we stopped at a road side top where women were selling the usual souvenirs as well as ice cream made from cactus fruit.  Oddly, the fruit looked just like a kiwi fruit inside but was very very very sour! 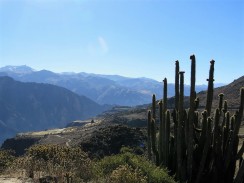 From here, we headed back across the mountains to Arequipa where we had a free day.  We don’t get them very often on this trip so I took the chance to try and catch up on coffee and blogs.   I did take time out to visit the Santa Catalina Convent – hands down it must be the most picturesque covenant in the world!  It was founded in 1579 and covers 5 acres!

Next up … a night bus to Cusco and the feared Inca Trail!

2 thoughts on “Arequipa and the Condors”